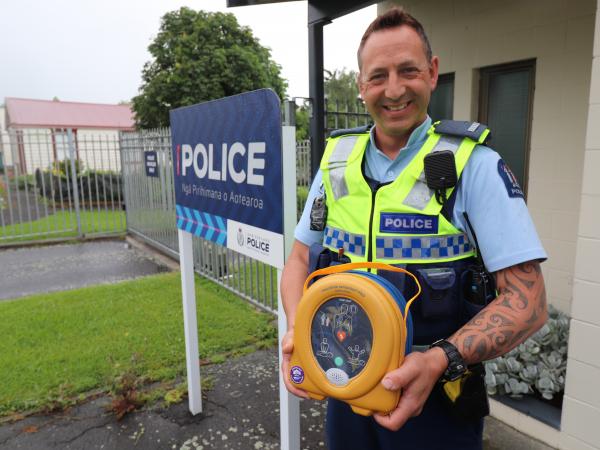 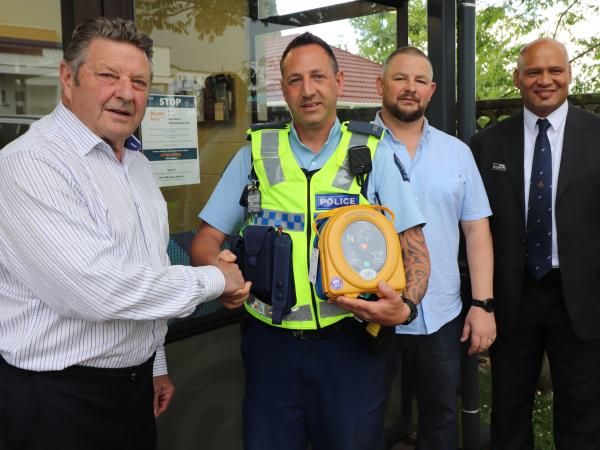 Constable Nick Preston has been resuscitated twice using a defibrillator and used one to help save another man's life. Now he's ensuring the devices are available to as many people as possible.

Nick, who is based in Te Aroha, was inspired to organise the recent donation of a 24/7 accessible AED defibrillator for police in the town - the second of the life-saving devices he has helped get donated to rural Waikato communities through his partnership with the Freemasons, supporting Safer Communities Together.

“I'm convinced that defibrillators are a life-changer, especially in some of our small communities where we know that medical response times can be slower,” he says.

Nick was among staff representing Police at the Pride Parade in Ponsonby, Auckland, in 2018 when a 77-year-old man collapsed and went into cardiac arrest. He sprang into action, performing CPR on the man and sourcing a defibrillator from a local bank.

“Two shocks from the defib and he started coming around," says Nick. "Through manual CPR and the defibrillator being readily accessible, the man was able to make a full recovery and didn’t seem to be disturbed that I had to break his sternum doing CPR, considering the end result.”

A year later, Nick moved to the Coromandel seaside town of Whitianga. He noticed the differences in rural policing compared to city life and the time it takes first responders to get to incidents such as cardiac arrests due to the geographical spread.

“I wanted to have a defibrillator in the local Whitianga police vehicle to give the community the best chance at survival when attending serious road accidents in such remote rural areas.”

He approached the local Freemasons, who funded and supplied a defibrillator. When he took up a post in the Matamata-Piako Strategic Traffic Unit a year ago, he saw another need in Te Aroha.

“You don’t get a lot of time – a few minutes until someone’s blood stops flowing and it affects your brain.”

Nick himself has had two choking incidents in his life where he was given CPR and resuscitated.

“I remember not being able to breathe, falling to the ground and a flatmate who worked for a company next door ran across and grabbed the defibrillator.”

The $3500 defibrillator was sponsored by the Freemasons through the organisation's charitable trust and was presented at Te Aroha Police Station on Monday.

“When Nick called and said there wasn’t one available 24 hours in Te Aroha, we jumped to the occasion,” says Richard Shelford-Woodcock, of Whitianga Freemasons.

Te Aroha Freemasons Master Elect Marc Dresser says this was an opportunity to provide the device to Police staff who are often the first responders in rural areas, to protect the community and make sure Te Aroha has the best available technology to help people.

“It’s the perfect opportunity to come together and show our support for New Zealand Police,” he says.