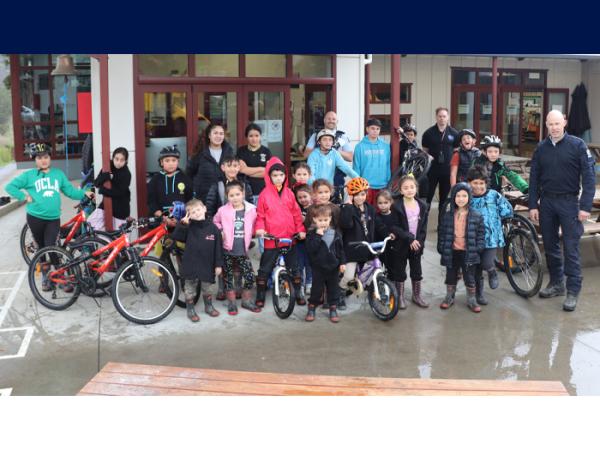 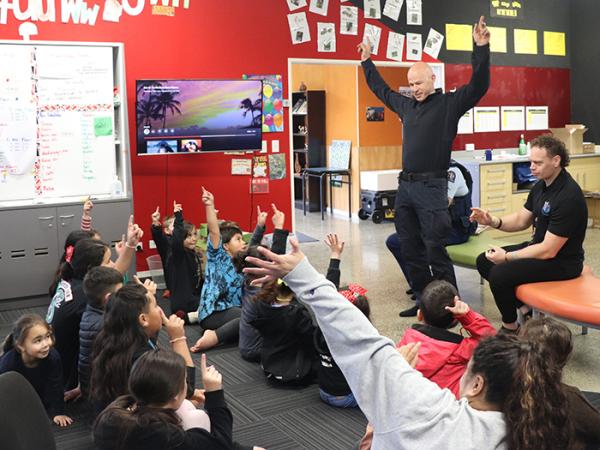 ​Te Kura o Te Wainui-ā-Rua in Ranana on the Whanganui River is the latest recipient of some sweet new bikes thanks to the programme Paihikara hei piki Te Ora - Bikes to promote health and wellbeing.

Whanganui Dog Handler Senior Constable Jason Page created and runs the programme, and recently he and Pouwhakataki (Iwi Liaison Officer) Sergeant Peta Pehi loaded up a trailer with ten bikes and drove up the river to make the special delivery.

Helmets were also provided with the bikes so the tamariki could keep safe while taking turns to ride, thanks to funding from Whanganui Blue Light and the local Warehouse store.

Jason and Peta were also joined by Whanganui School Community Officer Constable Ben Broughton who took the opportunity to introduce himself to the teachers and students.

Whaea Tia from the kura says the visit went down a treat with the tamariki.

“Te Wainui-a-Rua enjoyed our visit from Jason and the team,” says Tia. “Our students were so inspired by the kōrero and journey that was shared with them.

“We look forward to seeing more of the team on our awa and building good relationships within the community.

“Our tamariki enjoy riding bikes at kura and we want to acknowledge Jason for all his efforts in his kaupapa.”

The council’s Active Transport Facilitator Norman Gruebsch says he heard about Jason’s initiative and thought donating the bikes would be a fantastic way to help the community.

“We saw this as a great opportunity to liaise with Whanganui Police as a key community partner, and build on Jason’s previous positive engagement with the programme he runs that benefits so many,” says Norman.

“The generosity of Jason and others who support his programme – or have run similar initiatives in the past, such as Green Bikes – allows people in our communities to learn new skills, keep fit and get from A to B without the dependency on car travel.”

Norman says donating these bikes is just one part of many Mā Ake Let’s Go initiatives and collaborations with key partners – all geared towards supporting active transport in the Whanganui district, for the benefit of the community.

Jason started Paihikara hei piki Te Ora in 2020 and since then hundreds of bikes have been generously donated by staff and the community.

The bikes have not only gone to children but to families, as well as adults who have lost their driver’s licence and need help getting back on their feet to get to work and around and about.

Running the programme is a real team effort and Jason says his favourite part is seeing the joy on the children’s faces when they get to ride the bikes.

“There are so many benefits with the programme especially with building positive engagement with Police,” he says.

“The smiles on both the kids’ faces, as well as their families and other adults, when they receive a bike is priceless – it’s just awesome.”

Previous
The magnificent 11
Next
Anzac medal reunited with family