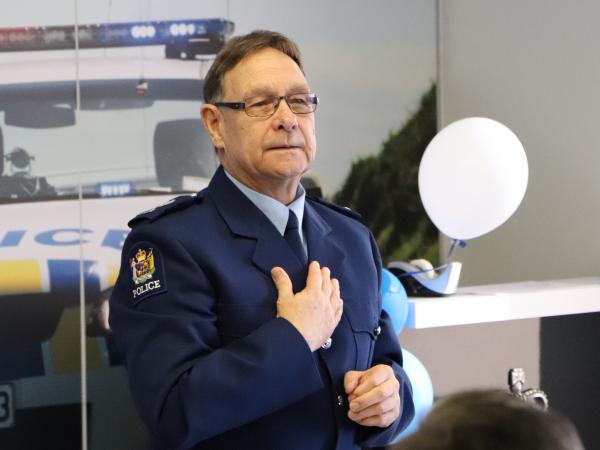 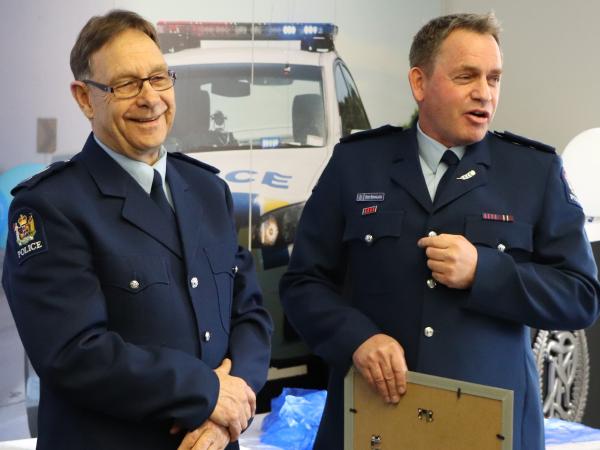 A police officer with a passion for road safety; a life-saver; a walking encyclopedia; a caring supervisor; and a true gentleman who would put you right without raising his voice.

Senior Sergeant Phil Critchley has shut the garage door on a 43-year Police and MoT career dedicated to making New Zealand’s roads safer for all their users.

Serving and former colleagues, representatives of other agencies, friends and family gathered at Police National Headquarters (PNHQ) to farewell Phil on his retirement.

Phil joined the MoT as a Traffic Officer in August 1973 and transferred to Police in 1992 as a general duties sergeant and section supervisor in Rotorua.

He also spent time working within Road Policing, the Police Infringement Bureau and the National Command and Coordination Centre, and ended his Police career as National Advisor Standards and Training in the CVST.

He is continuing his work in his new role as a Commercial Transport Officer with the New Zealand Transport Agency, based in Tauranga, where his focus will be on making sure we have safe and compliant operators on the road.

At his farewell, Phil reflected on the early days of his career, when drink-driving was commonplace, it was a battle to get people to wear seatbelts and more than 800 people died on the roads every year.

It’s a shame, he said, that more than 40 years later some drivers still haven’t got the message about alcohol and seatbelts.

“We’ve got to keep up this effort of ours in road policing,” he said. “It’s an absolute passion of mine and I’m sorry to go for that reason…

“Cars are safer with ABS and airbags but still we’re killing nearly 400 people a year. It’s a shame on people, it’s a shame on society. All I’m asking is that everybody keep on doing the great work that we’re doing.”

Speakers paid tribute to Phil’s grasp of detail and understanding of complex legislation, and his personable nature.

His friend and colleague Sergeant Mike Moloney said over many years of working together he had never heard Phil raise his voice “but I’ve heard conversations on the phone where he has quietly and politely put the person in his place”.

“As you depart from this building probably for the last time I think you should hold your head up high,” he said.

“The New Zealand public should be thankful that the work you’ve done in this office has saved lives on the roads… You and your family should be so proud of you. We are.”

Inspector Mike Brooklands, National Manager CVST and Phil’s final manager in Police, presented a certificate acknowledging his commitment and dedication to both MoT and Police.

“Senior Sergeant Critchley is often described as a walking encyclopedia of all things relating to commercial vehicle safety, making him the go-to person to ask the seemingly difficult questions,” he read from it.

“He is also well recognised for his personable nature and genuine caring manner.

“These characteristics enable him to forge trusted relationships with ease and saw him renowned as a champion for those around him who were in need of support.”