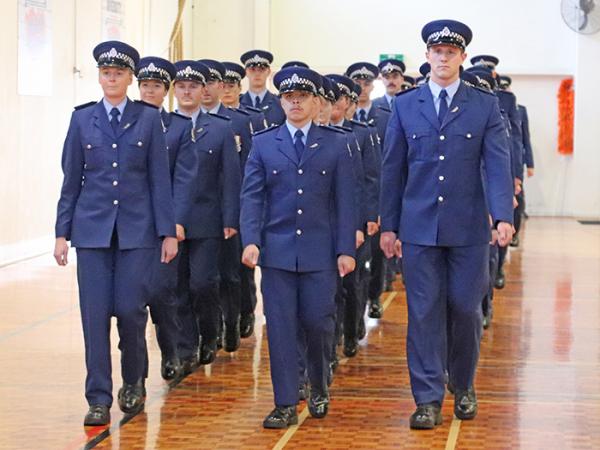 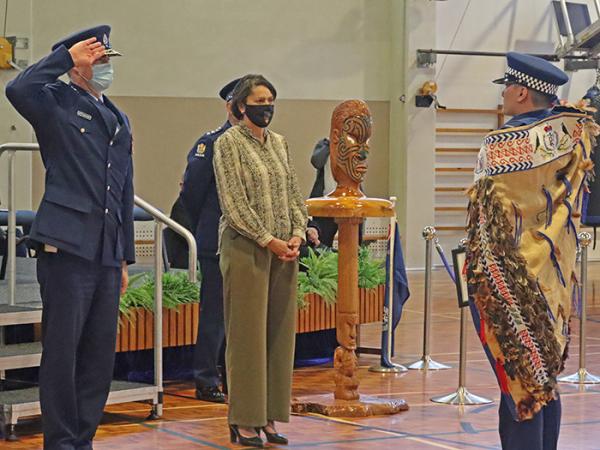 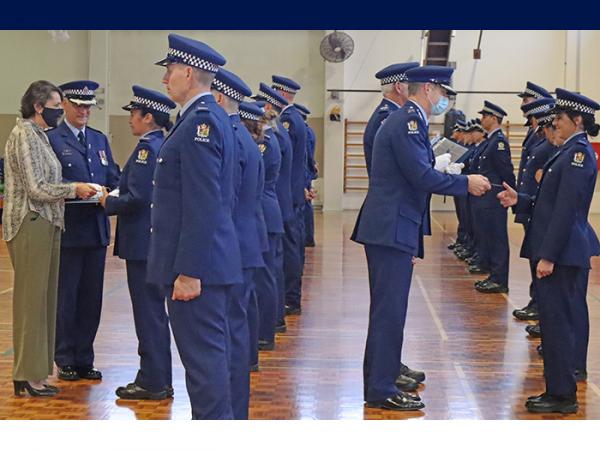 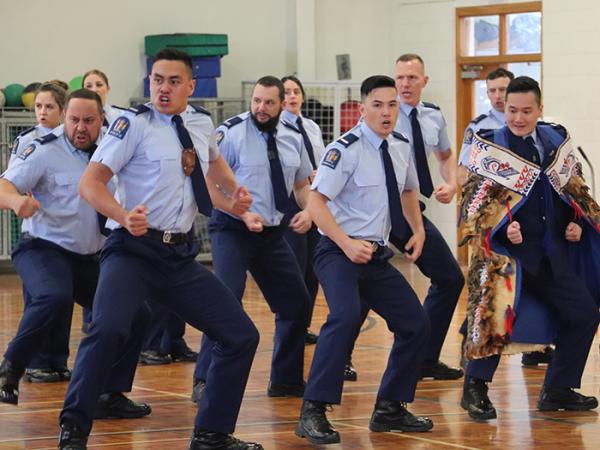 Home > News > Ten One Magazine > Stepping up to the front line

​Thirty-nine new constables are ready for their frontline roles after 16 weeks of Police training and a graduation - with loved ones watching on from afar in a livestreamed ceremony.

For five of the graduating Prue Tamatekapua Recruit Wing 346, New Zealand Police has been part of their working life for some years.

Constable Jack Bryant, for instance, has worked in Police Communications, a speed camera team and an impairment prevention team, while Constable Shoneen Dix previously worked as a physical education officer. Both are posted to Counties Manukau District.

Their taste of policing in those roles gave them a resolve to take the step on to the front line – “to give something back to the community and have a job that’s challenging but also offers variety,” says Jack.

“I felt I needed to get out into the community and help with the social issues that impact so many,” says Shoneen.

Fulfilling a childhood dream was Lucy’s goal: “I’ve wanted to become a police officer my whole life and joined Comms first to gain some insight into policing.”

“I am grateful to a detective back when I was 15 years old. If it wasn’t for her, I wouldn’t be here today – she helped me when I was going through a tough time in my life. I don’t know her name, but want to find her and thank her, and say – look at me now.”

And Peter, who is originally from South Korea, says “I have always found satisfaction in helping people and the opportunity to work for Police made me realise how much the people in the community need help and support.”

At the graduation ceremony on 30 September, Peter was awarded the Minister’s Award for coming top of his wing and also received the Firearms Award for firearms skills and safe practices. He says his success was thanks to the whole wing, “it wouldn't have been possible without their help.” 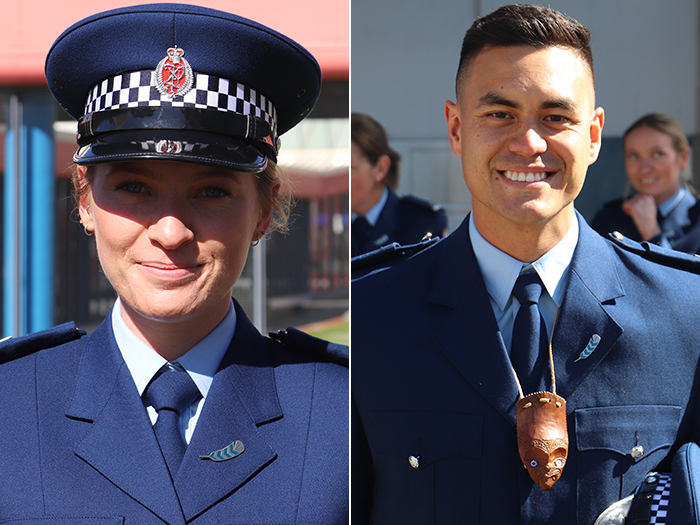 Constable Aron Wilson-McGrath (Raukawa ki whare puhunga, Ngāti Haua) has gone from recruiting others into Police to being recruited. He has spent the past two years working in a Police recruitment hub based in Tauranga, sending others off to Police College.

“It’s so good to have finally made it through the entire process. It’s quite different to what I thought it would be in my job as a recruiter, but we’ve come out confident and keen to get into work.”

Aron says he’s become a constable out of a desire to help Māori and Pacific communities, especially youth, to work more closely with Police.

“We need the right people in the uniform who will be fit for purpose to work with all of our communities,” he says.

Aron has also worked with young people in a not-for-profit organisation where many were from gang backgrounds and had a negative view of Police.

“Part of the reason for stepping into these shoes is to show them there’s another pathway and a different view to have of Police.”

Aron is posted to Bay of Plenty District.

A new challenge is what drove Constable Robin Hye Youn Cheong to a Police career. She has competed at world championship level in Taekwondo, including at the 2008 Beijing and 2012 London Olympics Games. Robin previously had her own martial art studio where she coached athletes and children.

“The work done while a recruit tests you mentally and physically. I recommend people are fit before they join up. It’s been a constant challenge, but a rewarding one,” she says.

Robin is posted to Waitematā District. 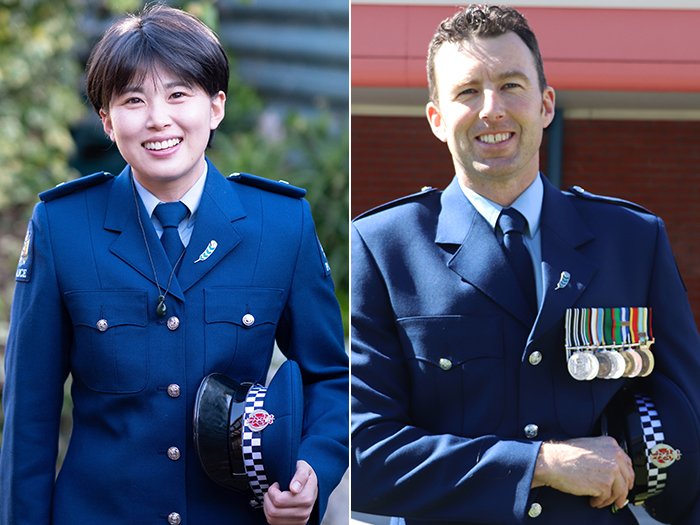 Constable Robin Cheong (left) is a former Olympian. Constable Lorne Capell has served in the New Zealand Army and is a volunteer fire fighter.

Leadership Award recipient Constable Lorne Capell says he’s long wanted to join Police, inspired by his cousin who has since retired from Police. Lorne has previously served in the New Zealand Army and worked as a builder in Central Otago, and he and his wife serve in the Lake Hawea Volunteer Fire Brigade. He will be posted to Southern District.

He says he’s grateful to his wife and family, for their sacrifices, support and encouragement that have made his journey within Police possible.

“We both come from families with long histories of serving our local community in Central Otago. By joining the Police, I hope I can honour the efforts of those that have gone before me.”

“He has been a great role model from the very first day of arriving at the RNZPC,” says Janine.

“He leads by example and has easily gained the respect and friendship of those around him. He has volunteered at every opportunity, is forward thinking, has promoted inclusiveness and has enabled his colleagues to be their best.”

Lorne had an opportunity to speak at the graduation ceremony, and with their graduation coming the day after Remembrance Day, Lorne fittingly paid tribute to all who had gone before them:

“Our wing pledges to carry on the excellent work of all those employees, both constabulary and non-constabulary, who for the last 135 years have been proud to serve our nation as members of the New Zealand Police.”

He praised the training and instructors as “second to none”, and spoke of the wing as an “outstanding group of people”.

“As diverse a range of folk as you’d ever hope to find, but so very united in our desire to be the very best versions of ourselves, to support one another through the trials and tribulations we’ve faced and overcome together.”

Police Commissioner Andrew Coster and Police Minister Poto Williams attended the graduation, but Auckland-based Wing Patron Prue Tamatekapua (also known as Prue Kapua) was unable to travel to the graduation ceremony. She did, however, record a message to the wing that was played during the graduation.

“As one of the partners of Nga Pirihimana o Aotearoa, the Māori Women’s Welfare League – I look forward to working together with you for our communities. Thank you for the privilege of being your wing patron.

The wing is being dispersed to districts as follows, starting their frontline duty on 11 October: 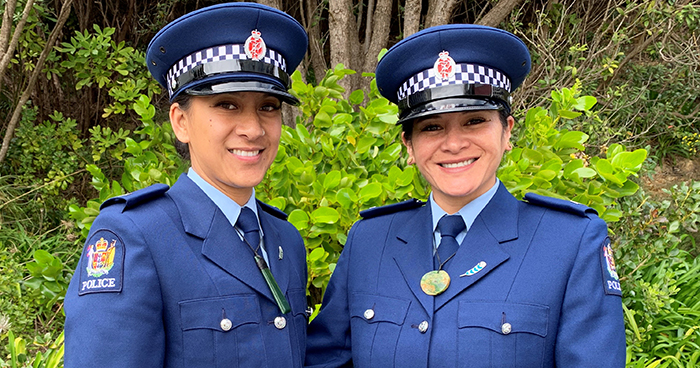 Constables Ari Tito, left, and Cina Moynihan. They composed a unique beginning to the haka especially for the wing, and Cina ​led the haka. Their version of the haka recognised local landmark Whitireia maunga (mountain), Horouta Marae, and the efforts of training staff - "who we are to them, and they to us," said Ari.