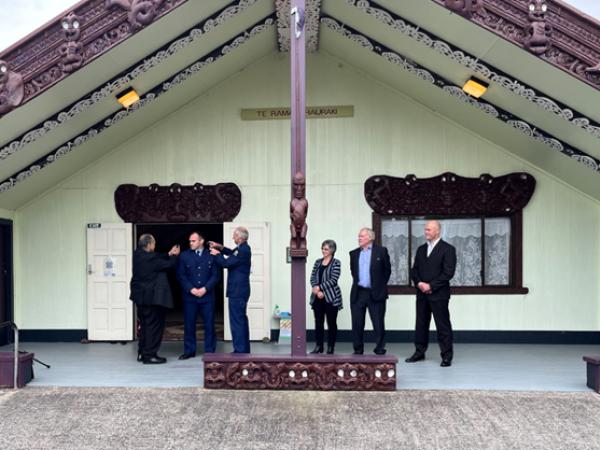 “Leadership is about being really clear of what you want to achieve and working with people to get there. I see so much potential for Eastern Waikato, both in terms of policing and in general and want to play my part in growing the area. Every day in Eastern I see diligent and motivated staff and these awesome people were a key reason I applied for the job.”

A former Morrinsville boy, Mike has returned to his roots to take up the role of Waikato East Area Commander.

The day was followed by a night of very little sleep for Mike as his wife Amy gave birth to their second child only 48 hours earlier. Although Mike’s pōwhiri was a day he’ll never forget, he felt an element of sadness that Amy, a fellow member of Police, was not able to share the occasion with him.

Mike spoke very eloquently from the heart, particularly of his upbringing on a dairy farm in Morrinsville, having strong work ethics instilled in him by his father with some of his ‘rough edges’ softened by his mother. He also referred to his rugby days where he learnt to lead his peers to success.

“I’ve come to the East with an open heart,” he said. “I see myself as a caretaker of the role and plan to leave it in a better position when my time is complete.”

Mike told his audience he looked forward to working with the District Leadership Team and joked that he was tallest of all the Waikato Area Commanders.

He was shrouded by men who hold significant mana in the Eastern Waikato – he was presented with a gift of a book on the history of Hauraki landmarks by the chair of the Hauraki Māori Trust Board, John McEnteer of Ngati Maru, Ngati Tamatera and Ngaati Whanaunga descent while well-known Maori academic Dr Koro Ngapo of Ngati Maru, Ngati Porou, Ngati Tamatera and Ngati Pukenga descent gave a speech mentioning having met Mike in his younger days when he played rugby for Hamilton Marist.

Mike holds a Bachelor of Management Studies from Waikato University. About halfway through his degree he began thinking of joining Police as he wanted a job that combined his academic and physical strengths.

He joined Police in 2005, working in Hamilton where he progressed through the workgroups, including Public Safety Teams, Team Policing, Road Policing and Beat Section.

Previous
Special delivery in the snow
Next
Big day out