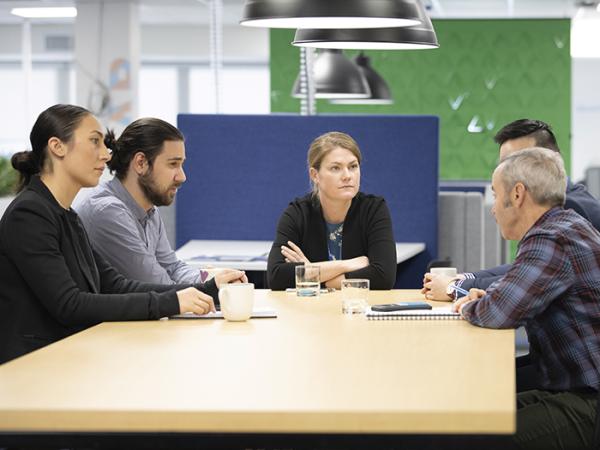 Police is opening the recruitment door to people who have valuable skills but cannot navigate traditional employment processes.

Three positions recently advertised within the Financial Crime Group (FCG) include the usual requirements – such as writing and analytical skills – and a very unusual one: Must be autistic.

The roles - one research analyst and two data analysts, based at Police National Headquarters (PNHQ) – are the focus of the Neurodivergence Programme pilot.

“There are individuals who are highly qualified but, because of their condition, may be unable to navigate a situation requiring a high degree of social engagement, like a recruitment process,” he says.

The initiative began with a recruiting conference in Australia and a session about opportunities associated with neurodivergent employment. Vanessa Merrett, Team Leader of Talent Pathway at the time, has a personal connection to this work and requested to lead a project to bring neurodiversity to Police.

The Talent Pathway team and Autism NZ developed a business case, which was put to the Police Executive last year. The FCG and National Intelligence Centre (NIC) identified appropriate roles and Autism NZ analysed the proposal.

It was decided to advance the FCG roles and Autism NZ designed job ads and a recruitment process playing to the strengths of people with autism.

Interviews are a major issue for candidates with problems communicating, responding to questions in a timely manner, understanding body language or making eye contact. 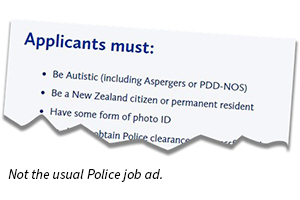 This requires a more practical, hands-on process to bring out a candidate’s potential.

Applications have closed. Now shortlisted candidates will be invited to a two-day assessment workshop to ensure they understand the roles and working environment, while helping Police and recruiters understand their abilities and needs before final selection.

“It’s about ensuring people have a really good understanding of what they’re getting themselves into, that they’re comfortable with what the role is and where they will be working,” says Christiaan.

“It’s also very important that we prepare our team to ensure we create an environment in which everyone can feel comfortable.”

Alongside coaching and in-work support for the newcomers – including mentoring from volunteers within PNHQ – Autism NZ is providing support to help prepare current team members.

Autism NZ Chief Executive Dane Dougan says Police has been fantastic in understanding the need to de-stress the process, provide ongoing support and create a welcoming workplace with the understanding that “difference is fine”.

His advice to staff is to treat an autistic colleague as an individual, as they would any newcomer. Adapting doesn’t have to be difficult.

“At a simple level - if someone doesn’t like smells, don’t sit them next to the kitchen,” he says. “If they don’t like noise and want to wear headphones, let them wear headphones.

“Include them as much as you can, and as much as they want to be included.”

“There’s a growing understanding that employing from the autistic community isn’t an act of charity - it’s a win-win situation for everybody if we get it right.”

Christiaan says he has had massively positive feedback from inside and outside Police, including Police staff with autism in their whānau.

“This is a pilot but I hope it proves not to be a one-off,” says Christiaan.

“Many people with autism have skills we can use,” she says. “Valuing Diversity commits us to find a way to let them contribute as they want to contribute.

“I’d like to thank Autism NZ for their support in helping us live up to this value.”

The successful candidates are expected to begin work from October.