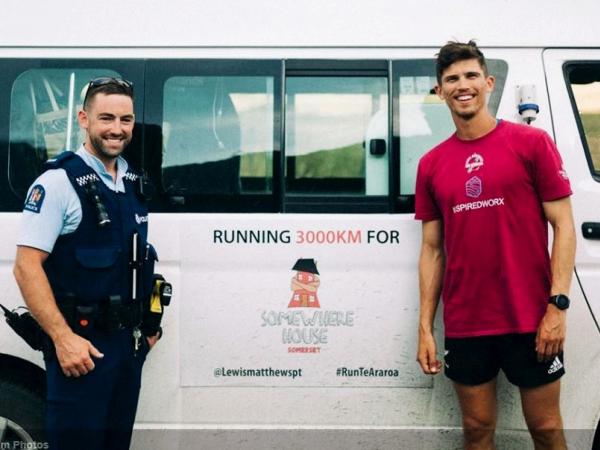 Home > News > Ten One Magazine > A way through the smoke

When bush fires threatened to disrupt a fund-raising mega-run, police were on hand to ensure the effort stayed on track.

Lewis Matthews arrived in New Zealand on 3 January to run Te Araroa, the 3000km trail from Cape Reinga to Bluff.

On Saturday 1 February he set out from Pipiriki, in the Whanganui National Park, with the aim of reaching Whanganui city, maintaining the 60km a day he needs to cover to complete the run in less than the current 53-day record.

He had run about 55km when he reached Parikino, where properties were threatened by a forest and scrub fire.

The road was closed and traffic was being diverted or held pending a decision from Fire and Emergency. Lewis’s van and support crew were in the thick of it.

At the cordon Lewis met Constable Josh Houlahan, of Whanganui Strategic Traffic Unit. Lewis explained the situation and Josh agreed to escort the van and support crew safely through the fire zone, avoiding helicopters with monsoon buckets to the south side and smoke rising up through the bush.

Thanks to Josh’s efforts, Lewis made it to the River City as planned.

He thanked Josh on his Facebook page, where he wrote: “A beautiful run from Pipiriki along the Whanganui River to Whanganui. Although at 55km we were stopped by a forest fire and were lucky enough to be escorted through by the Police after waiting for some time.”

Lewis is raising money for Somewhere House Somerset, which offers counselling, addiction services and other therapeutic support to people who need it in his home county in south-west England.

He is now in the South Island and is due to finish his run next month. You can follow his progress on his Facebook page at https://www.facebook.com/LewisMatthewsPT/