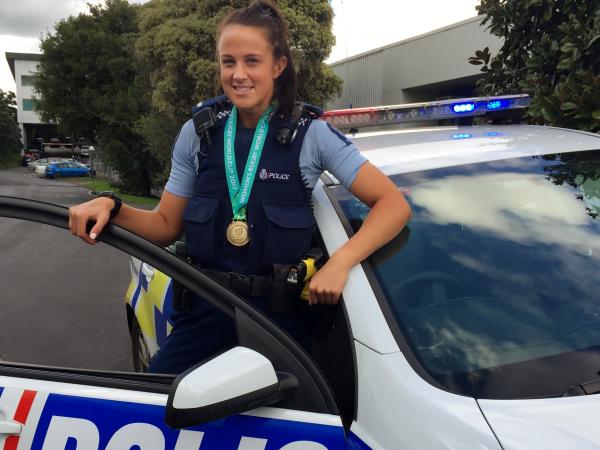 Home > News > Ten One Magazine > World-beater back on the beat

Four days after helping the Black Ferns lift the World Cup in Ireland, Constable Charmaine Smith was back at work in Auckland, pulling over a driver for breach of bail.

On Sunday morning (NZ time) Charmaine was playing in front of a global TV audience of millions, and scoring a try to help the Black Ferns to victory.

At 6.45am yesterday (Thursday) she was at Mt Wellington Police Station, dealing with the 283 emails waiting for her before heading out on to the street. Her first official task was the errant motorist.

“I was really excited to get into work, but possibly struggling a bit with jetlag,” she told Ten One during a pause in the shift. “I’ve been up since 4am.

“I was really looking forward to getting back in and seeing everyone and sharing a pretty cool moment with people that have been supporting me.”

She is thrilled with the support – both from the organisation, making it possible for her to play, and the friends and strangers alike who emailed her during the tournament. Her colleagues from PST Section 5 sent a video message.

Charmaine says the enormity of the World Cup experience has yet to sink in. “It’s such a special memory.

“It’s huge to even go to a World Cup, but to not only do it but to win it is really special. It’s hard to explain – it’s surreal.”

One highlight was her try in the final, drilling the ball into the base of the right-hand post in the 54th minute to give New Zealand the lead for the first time in more than half an hour.

The players are aware of the debate which has swirled around their amateur status, with calls for them to be paid like their male counterparts.

“I think being a rugby player makes me a better police officer and vice versa,” says Charmaine, who has been in Police for five years. “I love my job and I love that I can do both.

“Of course it would be awesome to be paid to play rugby but I think it’s really cool that I get to work for Police and play for my country.”

She takes her sporting celebrity status in her stride. “I had to buy some doughnuts for the section – they’ve been on my case because of all the media,” she says.

"I'd like to thank everyone for their ongoing support. It makes a huge difference to know people are backing me and I really appreciate it."