"I am making a collection of implements which have been used by criminals in important crimes to be retained at Headquarters such as housebreaking tools pistols, knives, base coin, etc." Commissioner Walter Dinnie, 1908 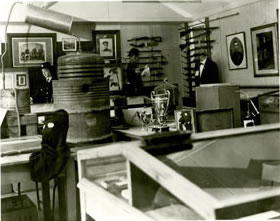 Into the 1950s the New Zealand Police Museum sat firmly in the long shadow of Scotland Yard's "Black Museum", or Crime Museum as it is now known.

The staff of the New Zealand Police Museum tell the stories behind some of the Museum's extraordinary collection objects.

The New Zealand Police Museum's collection storerooms are evidence that Dinnie's vision has stayed, at least in some part, in the hearts and minds of police throughout the decades.

Now filled with uniform and police equipment as well as offensive weapons, drug paraphernalia, and evidence from serious crimes - the things Commissioner Dinnie described as 'implements which have been used by criminals'.

The items chosen for this series refer to a time when Commissioner Dinnie's intention was for a collection of objects and extraordinary stories to whet the interest of new constables and expose them to the dark depths of the shady characters who shared our streets. 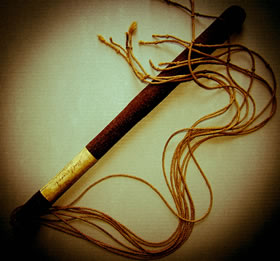 The first to feature in our Black Friday series, this cat o' nine tails whip with a paper label still attached to the handle.

The label bears the signature of Minister of Justice A. L. Herdman who authorised it for use on 9th October 1913. 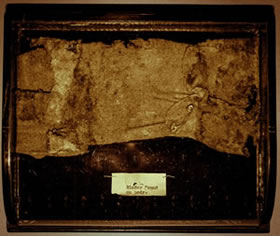 The next instalment in our Black Friday series is a curious glass case containing a dirty bandage secured with a safety pin.

Typewritten on a tiny paper label, attached to the base of the case with two bent pins are the words "binder found on body"; from an early case of baby farming in the Wellington area.

Look closely at this plaster cast of a headlight and you can see that each broken piece of glass has a number on it.

This glass is from the headlight of a car driven by man in 1940 who hit and killed a pedestrian and disappeared into the night.

Fragments of lights were found near the scene of the accident.

Other pieces of glass were found in the victim's coat and could also be identified as coming from the car.

After fleeing the accident scene a witness saw the car run into the back of a truck sparking speculation the driver was either too muddled to avoid the vehicle or deliberately ran into it to provide an explanation for the damage that had been caused when he struck the pedestrian.

Police caught up with the man, sitting in his car which had no lights. At first the driver denied his involvement, but the pieces of glass found at each of the scenes matched and were shown to be from the car's broken headlights.

The numbers written on the glass correspond with the scenes where the glass was found. 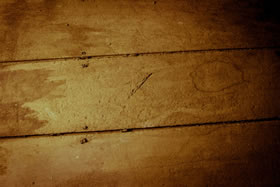 This object tells the story of a man who was charged for murdering his mate after a drinking bout. On a night in July 1921 the two men had been drinking in a farm hut in the district of Mangamahu, near Whanganui. One of the men lay on the floor and asked the other to cut his head off with an axe and his friend obliged. It was reported at the time that there had "been no quarrel and both men appeared to have been good friends".

Years later, when the hut was dismantled, a layer of linoleum was removed from the wooden floorboards and the mark left by the axe was revealed. 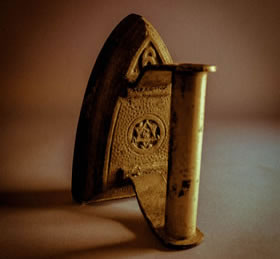 This seemly innocent iron was found on a settee at an Auckland house. A man murdered his sister-in-law with it in March 1928.

The victim was found dead on the floor of her bedroom.

It was reported that "improper relations had existed" between the two and the motive seemed to be selfishness on the part of the offender at the impending marriage of his victim's daughter and the prospect of her and her new husband living with her.

The murder was committed on the day his victim's daughter was to marry.

The murderer's head was an unusual shape and this was much speculated upon by "mental specialists" at the time. He was observed for several weeks by a former medical superintendent of Auckland Mental Hospital who observed that after slight provocation the offender would "develop into a frenzy of maniacal character". 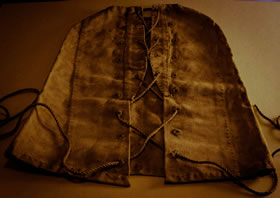 This heavy canvas straight jacket is fastened down the centre with ropes.

It was used to restrain unruly prisoners at the Nelson Jail and dates from 1880. 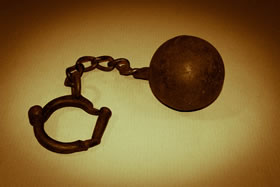 Ball and chain from Lyttleton Gaol. The gaol, built in 1857, was the first in the Canterbury colony and grew to be one of the largest prisons in the country. It closed in 1920.

For more information about the history of the gaol have a look at the site's summary on Heritage New Zealand. 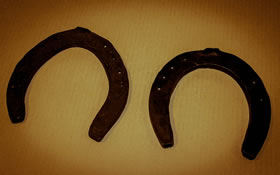 Horse shoes are seen as a symbol of good luck by the superstitious, but in this case the rider of this horse was hanged for the murder of a Pukekawa farmer in 1920.

Police examined horse tracks leading to and from the farm house where the farmer had been shot. They deduced the horse moved in a curious way and had been shod with different shoes.

Detective Andrew McHugh of Auckland, a blacksmith before he joined police, examined 1300 horses in the area. Only 148 horses were shod and one in particular, named Mickey, wore distinctive handmade shoes and swung one foreleg across the other in an unusual way when he trotted. His tracks exactly fitted the tracks found at the victim's house.

Apiol and Steel Pills from an Abortionist's kit

Described in newspaper advertisements in the early 1900s as "indispensable for ladies" and "sure and certain for all female complaints" this tiny glass bottle, filled with black Apiol and Steel pills, is from an abortionist's kit and is today's addition to our "Black Friday" series. 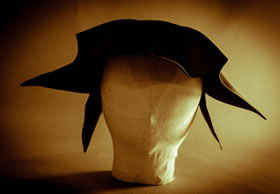 Another instalment in our "Black Friday" series is a black cap, the type traditionally worn by the judge when sentencing a murderer to death. 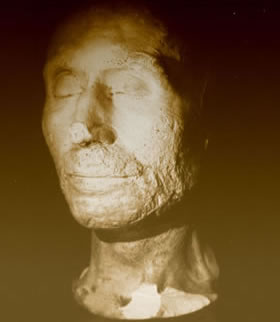 This is the only death mask in the Museum's collection, and is reputed to be of a man who was hanged at Invercargill Prison in 1879 for the murder of his wife.

It is claimed the mask was made by an amateur dentist who assisted the hangman.

The dentist used the executed man's skull to practice his dentistry skills and later went on to become a well known practitioner in Dunedin. 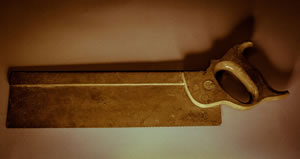 We're reaching into the shadowy depths of our collection for this "Black Friday" instalment.

This tenon saw was used in 1938 by a young man to dismember the body of his father; whose remains were found in two suitcases under Picton Wharf. 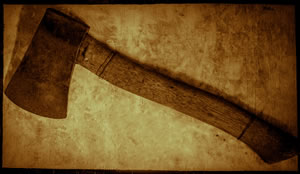 The second to last addition in our "Black Friday" series, this tomahawk was used by a Dunedin man to murder his parents in 1936.

The man was declared insane and was ordered to be kept at Seacliff Asylum. 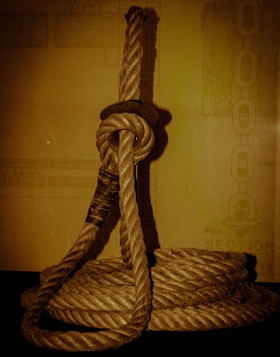 This last object brings our "Black Friday" series to a close, it is a hanging rope from Mt Eden Prison.

This rope was used during the 1920s and 1930s, a period which saw the executions of five men at the prison.

It appears in our exhibition on capital punishment here at the New Zealand Police Museum.