Why do we have safe speed cameras?

Police and safe speed camera enforcement of safer speeds and running of red lights at intersections is a crucial part of reducing death and serious injuries on our roads.

Safe speed cameras are placed in high risk locations where officer enforcement may not be possible for a variety reasons like road layout and the safety of drivers and officers.

Of those, nine were fatal crashes and 141 were serious injury crashes caused by a driver running a red or an amber light.

Speed remains one of the main factors for people dying on New Zealand roads. International research shows that by reducing your speed, the severity of a crash can be significantly reduced – and in many cases avoided.

Increased speed, regardless of vehicle type, puts vulnerable road users such as pedestrians, cyclists and motorcyclists at greater risk. For them, drivers stopping at red lights and even a small reduction in vehicle speed could save their life.

But Police and safe speed cameras can’t do it alone. Road safety is everyone’s responsibility.

What equipment is being used to enforce speed and red light running on our roads?

There are three types of safe speed cameras currently operating:

Police officers also use radar and laser devices to enforce speed limits to help reduce death and serious injury on our roads:

Police in conjunction with NZTA’s Safety Team and an independent transportation sector expert, Abley Transportation Consultants, have developed the Static Camera Site Selection Methodology to identify locations on the road network that have a proven history of crashes or potential for crashes resulting in death or serious injury.

How accurate is the equipment used to enforce speed?

Any new camera is subject to a rigorous testing and approval process before being used.

How secure is information collected by safe speed cameras? 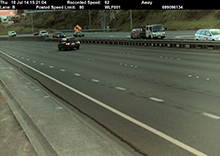 Images are stored digitally and cannot be overwritten or altered. A security indicator prevents the image from being tampered with at any stage. All images and information such as time, date and location are encrypted. Static and red light camera images are transferred wirelessly over a secure network. Mobile safe speed camera images are downloaded by mobile camera operators and transferred to the Police Infringement Bureau for processing.

Who gets the money from safety camera infringements?

Police does not retain any of the money from infringements. The money goes to the Government’s consolidated fund.

Police would be delighted not to have to issue any infringements, as this would show everyone was driving safely and not putting themselves or others at risk. This would see deaths and serious injuries on our roads reduced significantly.