Home > Advice & Services > Drugs and alcohol > Methamphetamine and the law

Methamphetamine and the law 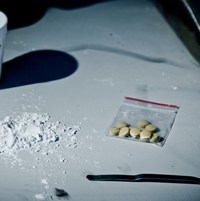 In New Zealand, it is available in two main forms: a powder and a crystal 'rock'.

What Police are doing about methamphetamine

Methamphetamine has serious social, economic and even environmental consequences. Police are focused on breaking-down local and international crime syndicates and disrupting the production, importation and distribution of methamphetamine.

Police has a methamphetamine action plan which makes disrupting methamphetamine manufacturing a priority for all Police staff. Police works closely with the Organised and Financial Crime Agency of New Zealand, which targets organised criminal groups such as gangs that are involved in the methamphetamine trade.

Methamphetamine is manufactured in New Zealand in clandestine (secret) drug laboratories, known as 'clan labs', or imported in crystal form. There are risks in the process due to the poisonous, explosive, corrosive, toxic and extremely flammable chemicals used.

If you find a clan lab, get out

Strange smells, fumes and vapour escaping from windows or ventilators, sealed windows and premises being used for purposes other than normal, are some of the signs that indicate premises may be being used as a clan lab. If you suspect you have found a clan lab get away from the area immediately.

If you suspect the house you are moving into has previously been used as a clan lab, contact your local council's environmental health officer or your local police station.

Methamphetamine is a class A drug under the Misuse of Drugs Act and therefore attracts severe penalties.

Those caught importing the precursors of methamphetamine (pseudoephedrine and ephedrine) without a licence can attract jail sentences of up to eight years.

Possessing a pipe or utensil for smoking methamphetamine is also an offence and can result in a one year jail term or a fine of up to $1000.

To find out more about penalties associated with methamphetamine see Illicit drugs.

What you can do about methamphetamine

If you have information about offences relating to methamphetamine:

If you or someone you know is having problems with methamphetamine, other drugs or alcohol, it is important to know there are people who can help. To find out more see Getting help.

To find out more about methamphetamine, its risks and effects, visit the website of the New Zealand Drug Foundation.