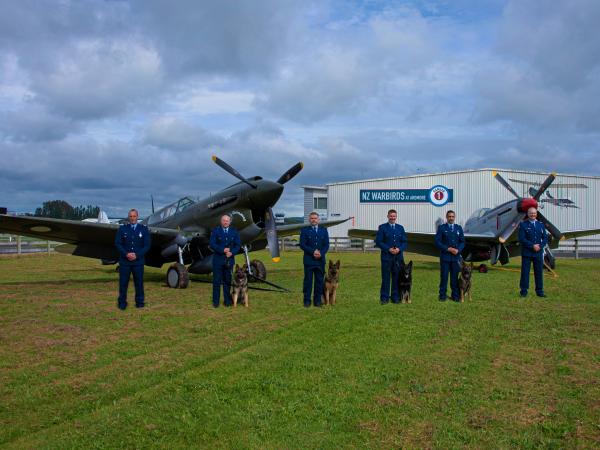 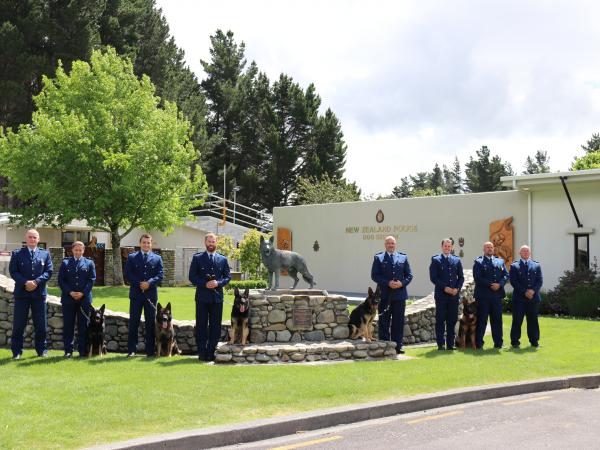 Trained up, qualified and ready to go to work are nine new Police dog teams who will be working across Northland, Tāmaki Makaurau, Central District, Bay of Plenty and Canterbury after graduating from the New Zealand Police Dog Training Centre, Trentham, today.

It was paws and feet forward as the teams paraded before Commissioner Andrew Coster, Deputy Commissioner Tania Kura, Police executives, colleagues, proud families and friends at the New Zealand Police Dog Training Centre, Trentham, and at a smaller ceremony in Auckland.

Three of today’s new teams are first time handlers, with graduation marking the operational start of their careers within Dog Section. This follows several years of working on other frontline policing duties, fostering pups and successfully completing months of training in their home districts and on dog training centre courses.

They join 123 Police patrol teams, with 90 operational and the others in training. Police also has 12 operational detector dog teams. The operational teams respond to tens of thousands of incidents each year and help us keep our communities safe.

Senior Constable Elyse Lewis, Northland, graduated with her second operational dog, 21-month-old “Stark”. Elyse joined Police in 2006 and dog section in 2015.  She is still working her first operational dog Mist in an AOS capacity. Elyse has competed twice at the National Championships with Mist, becoming the National Champion in 2019.   She was also placed fourth in the 2018 Australasian Championships.

Heading back to Canterbury with his fourth operational dog is Senior Constable Lyal Bayliss and 20-month-old “Welles”. Lyal joined Police 23 years ago and has been a dog handler for 17 of these years.  During this time, he has served as a handler in both Search and Rescue (SAR) and Armed Offenders Squad (AOS).  Lyal has received a Commissioner’s Gold Merit Award for bravery in apprehending a man armed with a shotgun after a home invasion in 2012.  He also has a Bronze Merit Award for his role in apprehending a male in another serious incident in 2009.

Constable Brad Smith, Taranaki, graduated with his second operational dog 21-month-old “Thorn”. Brad joined Police 10 years ago, the past six years in New Plymouth Dog Section.  Brad fostered his first dog Kona from eight weeks through to becoming operational (including being qualified in SAR).  He competed in the 2017 National Championships.

Constable Levi Bent, a first-time handler from Tauranga, graduated with four-year-old “Floki”. Floki was initially trained and became operational with another handler but is now working with Levi.

Constable Joel Martin, Whanganui, graduated with his first operational dog 18-month-old “Alfa”. Joel is on a one-year development position until February 2022.  He has been fostering police pups since 2016.  Alfa is his eighth so it’s extra special to graduate together as an operational team.

COVID-19 alert level restrictions prevented four Tāmaki Makaurau dog handlers taking part in the Trentham course – but it didn’t stop them training and passing the operational training requirements.  They completed it in their home district.

Constable Andrew Clarke, son of a former dog-handler Ross Clarke, graduated with his third operational dog 18-month-old “Sam”. In 2015 Andrew was appointed a trainee handler position and trained full time with Lee who he fostered from an 8-week-old puppy. The team graduated in June 2016 and Andrew worked Lee until 2018 when he was re-teamed with Vulcan, working in a patrol dog and AOS capacity.

Constable Ryan Parker graduated with his second operational dog two-year-old “Phantym”. Constable Parker joined Police in 2008 and was stationed at Pukekohe for seven years where he served on Public Safety Team (PST) and as an Area Intel Officer.  He started as a trainee dog handler on the Auckland dog section in 2016 with police dog Mason. The team graduated in 2017. Mason qualified for specialist AOS roles in 2019, and Ryan still works Mason in AOS duties.  Mason, who is now seven years old, is due to retire in 2022.

Constable John Olesen graduated with his second operational dog, 18-month-old “Viking”. In 2018 he was a recipient of the Erridge Cup, a national Dog Section award given to best rookie handler in their first year of operational work.   Brew also became a specialist AOS and tactical dog – but a back injury forced Brew’s retirement in September 2021.

The following handlers from the August 2021 Finals Course at Trentham, which was shortened due to COVID-10 alert level restrictions, were all recognised today.  They passed their course, but a graduation ceremony was unable to be held.

Constable Aaron Wilkins, Wellington, and 20-month-old “Utah”, his first operational dog, were on parade today.  Aaron worked for three years as a Customs Officer in Wellington before joining Police in 2014.  He has worked predominantly in the Hutt Valley. He’s also spent time on CIB and the Wellington Tactical Targeting Team before joining AOS and Dog Section in June 2020.  He has trained with Utah since November 2020.

Experienced Canterbury handler Constable Tom Byrne was unable to attend today, but he graduated with his second operational dog, two-year-old “Sarg”. Tom joined Police in 2011.  He qualified with his first dog Lex in 2016 but due to a back injury, Lex is now retired and lives with his handler at home.

Hawke’s Bay’s Senior Constable Blair Benson was also unable to attend, but in August he graduated with his fourth operational dog two-year-old “Pace”. Blair joined Police in July 1997 with the past 18 years as a dog handler in Eastern District.  Blair was runner up in the 2008 National Championships with his first dog Kane.

Deputy Commissioner Tania Kura congratulated all the teams for their hard work and achievements, saying they are a very valued part of a police service. “I want to pass on sincere thanks from myself, the Commissioner and the Police Executive for your commitment to this important and integral part of frontline policing in New Zealand.”

She gave a special ‘shout-out’ to the Tāmaki Makaurau graduates “Thank you for your commitment during such a trying time in Auckland.”

Police dog graduation Wellington JPG - 5MB
Previous
Images of human remains captured at Pike River Mine
Next
“At the end of the day, you are putting people’s lives at risk” - Police and commercial pilots appeal to put an end to laser strikes