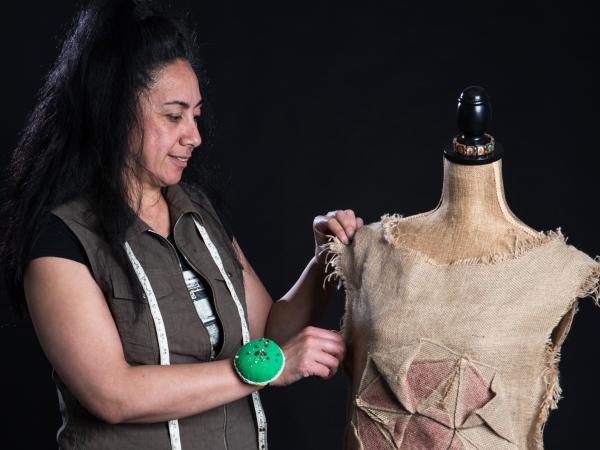 Home > News > Ten One Magazine > From the beat to the catwalk

Frances Nimeti is stitching up her dream of organising a Police-themed fashion show.

In a Ten One ‘Beyond the Blue’ story in March, Frances spoke of her desire to combine her passion for fashion with her love of her job with Police.

After months of work, Frances – a Crime Reporting Line communicator at Harlech House, Otahuhu, and a fashion designer away from work - and her organising committee have booked the BNZ Theatre at the Vodafone Events Centre in Manukau for 18 November.

The show – called Undercover - will see Police staff showcase their talents, with designers, makeup artists, hairdressers, models and performers among those volunteering their time.

Five designers including Frances – all Police staff – will show ten designs each. In addition a body artist is preparing ten designs – and Frances says they are looking for ten “people who aren’t shy” to hit the catwalk in body paint and not much else.

There will also be a special category for Police staff to design a police uniform of the future, with prizes on offer.

Tickets will be on sale soon. The alcohol-free event will be open to the public and will raise money for Lifeline Aotearoa, a charity seeking to reduce suicide through a 24/7 telephone counselling and advice service.

“It’s all about showcasing the talents of Police staff and what they do outside their normal role,” says Frances, who last year ran a sold-out show to raise money for a community hall for the Pukapuka (Cook Islands) community in Auckland.

“When we suggested a show for Police staff I was quite surprised - we were just trying to see if there was any interest out there but we got a really good response straight away. I think that’s really exciting.”

The organisers chose to support Lifeline because the issue of suicide is particularly relevant to police work.

“Suicide affects all sorts of people from the young to the old, including Police staff,” says Frances. “Everybody knows someone who has been affected.”

Event organisers asked Public Affairs for support and permission was given to use Police branding in recognition of the high profile of Police staff involved and the very worthwhile cause, says DCE Public Affairs Karen Jones.

“We’re very happy to support our people in such an exciting event which shows the great diversity of talents within Police, and for such a worthy cause,” says Karen.