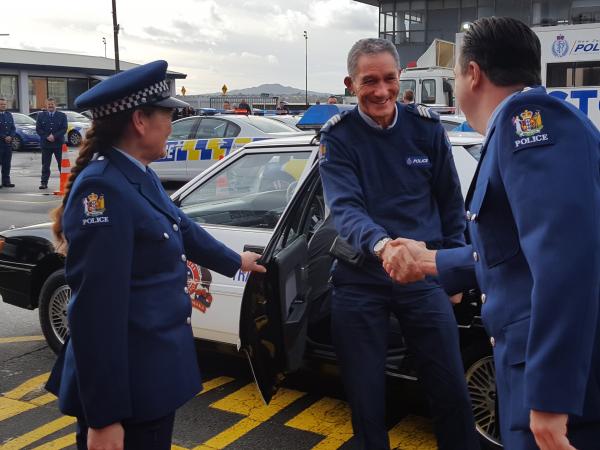 Sergeant Bill Marino started his career on a motorbike, moved to a car and is now looking forward to spending his retirement on a boat.

In between times, he was a founding member of the former Ministry of Transport’s motorbike display team, clocked up countless hours patrolling Auckland’s motorways and helped pioneer improvements to the way Police conducts checkpoints.

After nearly half a century on the road, the Traffic Alcohol Group Supervisor, who is based on Auckland’s Harbour Bridge, is hanging up the breathalyser for the last time. Colleagues donned Number Ones today to welcome Bill as he arrived for his final day at work - appropriately in a restored Mitsi V3000, in MoT livery.

Bill joined the MoT as a traffic officer in 1969, starting his career on patrol on a Triumph Trophy before moving on to a Norton Commando and then a patrol car.

“You had to start off on a motorbike in those days, then go into a car after about a year,” says Bill. “I would have preferred to stay on a bike.”

His days on two wheels weren’t over, however, as he was invited to join the MoT’s motorcycle display team when it started in the 1970s. Tricks included riding in formation and passing each other closely, and the team performed around Auckland and the top of the North Island.

“One of the riskiest was riding in a square formation and accelerating past the rider in the middle of the square.

“We did about two or three displays in Whangarei, and around Auckland, including at Whenuapai Air Base. You didn’t want to fall off there because the runway had this horrible, horrible concrete.”

Bill was in the MoT when Auckland motorway patrols began in the early 1970s, and describes his days as a traffic officer as “great times”, though the merger with Police in 1992 also brought benefits.

“When we came into Police, then we had all the powers we needed to carry out our duties fully. We could do our jobs.”

One of his highlights with Police was being selected as one of three officers who travelled to Victoria in the mid-1990s to see how Police there conducted drink drive checkpoints. In those days, Police staff here had to take offenders back to a station for processing, making it difficult to sustain staff at the checkpoint. “At that point, the checkpoint would basically fall over.”

The Aussie trip led to the introduction of the 'booze buses' Police operates now.

Bill looks back on his time as a traffic and police officer with plenty of great memories about the people he’s worked with and the bikes and cars he’s ridden and driven.

But at 71, he’s calling it a day and plans to concentrate on one machine and one task in particular – his 5.3-metre Alicraft boat and catching fish.