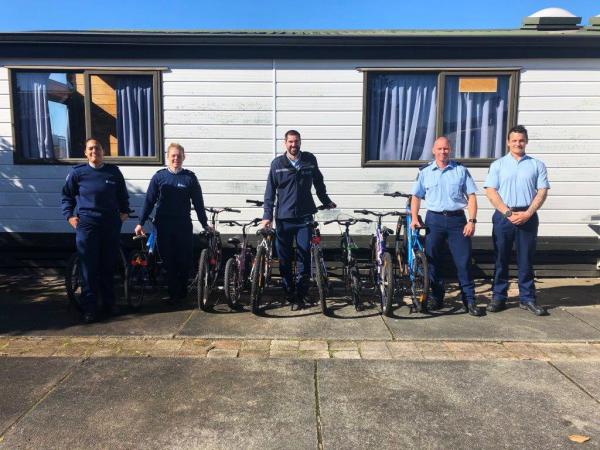 Youngsters at an Oranga Tamariki Family Centre received a welcome surprise when they arrived home from school recently – a rack full of newly repaired bikes to use.

During the past few months, Acting Sergeant James Garbett and his PST4 Gisborne Team have been salvaging old and broken bicycles, repairing them and donating them to families in need.

“The team services the bikes, then we pass them on to families who need them, along with a brand new helmet and high-visibility jacket,” says James. “So far about 10 Gisborne families have received bikes.”

“The home has had an empty bike stand outside and we set a goal to fill it for the children who live at the centre,” says James.

Delivering the bikes while the tamariki were at school meant a nice surprise when they arrived home.

Florrie Brooking, Gisborne Services for Children and Families Site Manager, says they are very appreciative of the help given by James and his team.

“We are very excited about how we can build on this relationship for our young people,” says Florrie.

The initiative grew from work James started while a sole-charge officer at Te Araroa on the East Cape.

“I noticed many of the local children had broken bikes and weren’t aware of the road rules, so I started fixing up bikes and worked with the local schools to run some sessions teaching bike safety and road rules,” he says.

He received strong support from local iwi and Fonterra, who provided helmets and high-vis vests.

“After leaving Te Araroa I still had a lot of old bikes and parts in my garage so continued the work in Gisborne. All of my team are involved in fixing up the bikes in their spare time.”

James says if staff attend a family harm incident and notice the children don’t have bikes they will often return the next day with a bike, helmet and high-vis vest.

“It’s a way of connecting with that family in a positive way after what is often a tense situation.”

And a recent Facebook post about this great mahi has seen James inundated with offers from the community of old bikes in need of repair.

“It’s wonderful to see the community get behind this initiative. It looks like my team will be kept busy for the next few months repairing these newly donated bikes ready for their new owners.”