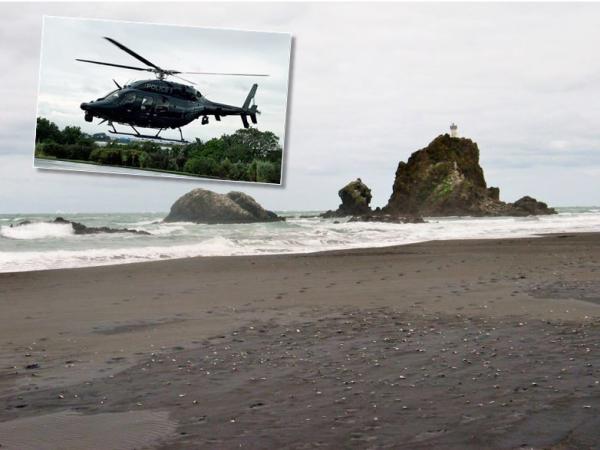 The infamous waves of Auckland’s West Coast almost proved too much for an Auckland man recently - until he was dramatically rescued by the team on board the Police Eagle helicopter.

The man spontaneously decided to go for a swim after walking around the remote Whatipu Beach area, south of Piha, for several hours.

Though he was a strong swimmer, rips meant he was unable to get back to shore.

Struggling to swim and swallowing salt water, he shouted for help to some fishermen but they were unable to hear him.

He managed to scramble on to rocks and was able to grab the attention of a couple walking along the beach. Realising the man was in serious trouble, they called emergency services and the Police Eagle helicopter was dispatched.

Eagle arrived at the scene around 20 minutes later, with Air Support Sergeants Colin Ware and Jeff Brown and pilot Steve Barry on board.

After assessing the situation the team decided manoeuvre the aircraft as close to the water as possible to get close to the victim. With precision flying, the chopper got close enough for the man to grab the railing and be pulled to safety.

“The conditions were particularly difficult on that day, with the water temperature extremely cold,” says Colin.

“It was only a matter of time before the man succumbed to the ocean - we’re just so thankful we were able to get to him in time, especially considering the remote location”.

The helicopter landed at a nearby campsite, where they waited for a ground-based Police unit and St John Ambulance team, who quickly worked to stabilise the patient.

After recovering, the man uploaded a heartfelt message on social media praising the efforts of the team on Eagle, the couple who raised the alarm and the St John Ambulance team: “Big thanks to the helicopter team and the police and ambulance on the ground and just everybody involved for taking the time out of your lives to save mine. I’m truly so grateful to be alive.”

Previous
Cultural diplomacy on The Rock
Next
Erebus: The New Zealand Police story