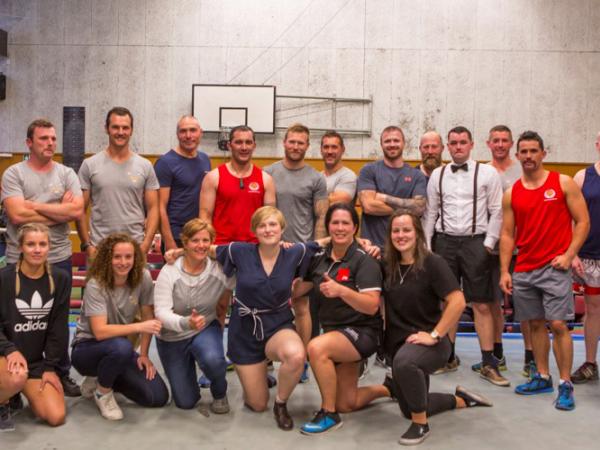 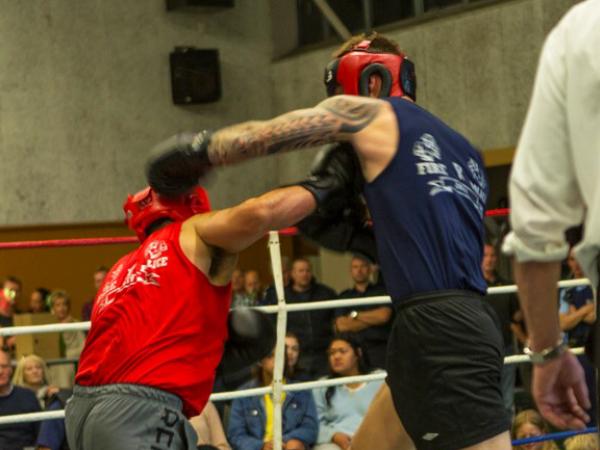 Home > News > Ten One Magazine > Fellowship of the ring

Staff from Police and Fire and Emergency New Zealand came to blows in Dunedin last month – but it was all in the name of friendship.

The two services came together for a night of boxing at Dunedin Central Police Station, with 11 boxers from Police and nine from Fire on the card.

“Everyone trained together and an awesome atmosphere and some good friendships were made,” says Sergeant Jono Airey, who organised the event along with Sean Stocker from Fire and a large number of volunteers.

“Training was taken by skilled boxers from Police and Fire ranks and was open to all whether competing on the night or not.

“Even match-ups were identified through a process based on age, skill and weight class.”

The station hosted an all-Police boxing night last year, but this year the invitation was extended to Fire to bolster inter-service relationships.

The station gym was turned into a boxing arena complete with seating, a bar area and food – a wild boar shot by Constable on Trial Josh Burt.

MC for the night was Inspector Matt Scoles and the ring announcer was Constable Nick Wells. The ring and ref were provided by Otago Boxing Association.

A crowd of more than 300 watched the ten bouts – comprising three 90-second rounds – including three female bouts. The fights were Police v Fire apart from one all-Police female bout as Fire was short of one female participant.

Jono says the Police team included three debutants and fighters ranging in age from 21 to 53.

“It was a massive event and created a real buzz,” he says.

“The emphasis was on building relationships but it also added to the culture we have down here in Dunedin and will no doubt become an annual event of some sort.

“Thanks to Inspector Jason Guthrie from Police and Area Manager Lawrence Voight from Fire for supporting the event.”

Previous
All in the family
Next
A touch of magic