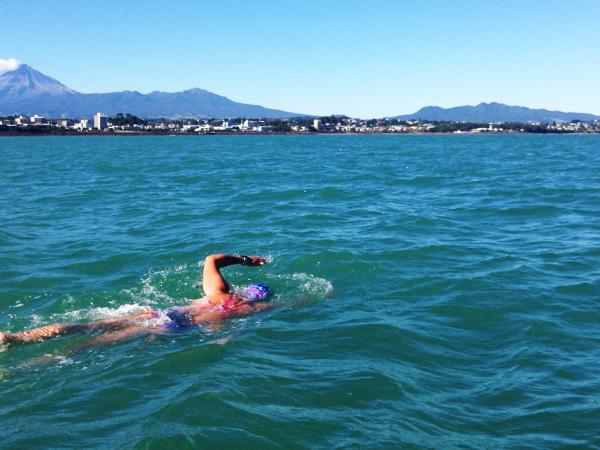 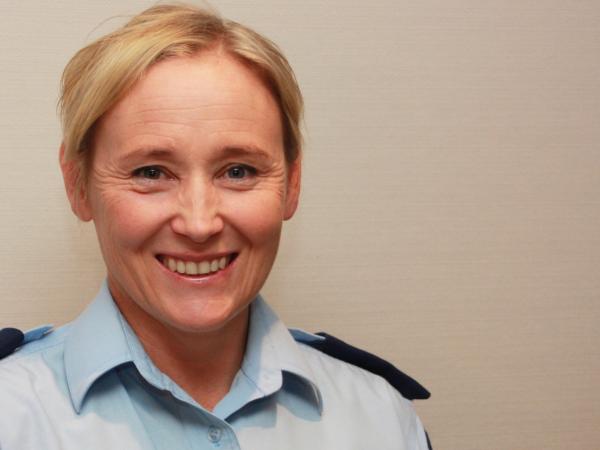 Home > News > Ten One Magazine > Getting things Strait with FEO

Police offers Flexible Employment Options (FEO) to help staff balance the demands of life inside and outside work. When North Taranaki Prevention Manager Senior Sergeant Karley Hunt committed to swim Cook Strait, it was clear the training schedule would not fit into the full-time working week and family life. FEO made it possible.

I’ve been a recreational swimmer for years.

I joined Police 20 years ago in Taranaki but I’ve worked all over the place – I was working in Auckland when I really got into ocean swimming. There was always someone to go with there.

Two years ago I returned to Taranaki with my husband Cam and son Joel. One day I was talking about ocean swimming to Senior Constable Pete Wright, a Youth Aid constable from Stratford and chair of Central Taranaki Blue Light. He asked if I’d considered swimming Cook Strait.

I had – it was an extreme bucket list thing for me - but I didn’t have the means or opportunity. Pete said: “What if we supported you and you raised money for Blue Light?”

As a Prevention Manager I’m very supportive of Blue Light. If we can reduce one young person’s offending or give a disadvantaged youth a chance that gives them a future, it’s worth it.

That was a year ago. I found a coach and Pete found sponsorship - preparing to swim Cook Strait comes with costs.

As well as pool costs and nutrition, you need a skilled navigator and to be validated you need an observer. I need a support crew and I’ve organised a St John Ambulance paramedic because hypothermia is a risk. At the moment Cook Strait is about 16C.

Training was initially a daily 4km session, four times a week, with a three-hour swim in the pool at weekends. More recently it has been two 6km sessions a day for four days and a three-hour ocean swim at the weekend. I recently moved up to a six-hour sea swim.

FEO and a supportive family have let me maintain a degree of work-life balance. Joel is now three and Cam is a police officer in Stratford. I needed to be able to manage my training and still have quality time with them.

After having Joel I had six months’ maternity leave then went back to work full-time – I didn’t use FEO. Now with FEO I’ve reduced my hours from 40 to 30 a week, until April.

I was surprised how easy the process was, even during the transition to MyPolice. I applied on the old system and waited while the new system cranked into gear. I said what I wanted to do, it was approved by my supervisor and actioned pretty much that day.

To be honest, it hasn’t been easy to adjust to the reduced hours. There’s always a lot to do at work. It takes commitment and understanding colleagues to make it work.

The furthest I’ve swum was in the 17.5km Taupō Epic swim earlier this year. I was in the water for seven hours and completed 15km before they packed up the course.

It was my first swim after eight days off with my ear and sinus infections. I was disappointed but what mattered was that I didn’t want to stop - I had mentally prepared myself to carry on.

The mental stuff is going to be huge. My coach reckons it’s 30 percent capability and 70 percent mental preparation. That will be make or break.

Nutrition requires discipline – I’ve had to double my intake, pretty much. I’m encouraged to eat things you’re told aren’t good for you – bread, rice, pasta, lots of sugary stuff. Nothing’s off the table.

I need energy because I burn around 1500 calories with a three-hour swim. And I’ve got to maintain my blubber – if I’m too skinny there’s a real risk of hypothermia. The trouble is, the harder I train, the less I feel like eating. But that’s normal - I know others have experienced the same.

In my mind the worst thing is the jellyfish. I was stung by Portuguese man o’war bluebottles in East Timor a few years ago and I think these over-sensitised me.

You can’t see or feel them at the time but they get stuck in your togs and basically fire venom at you until you take your togs off. I’m constantly covered in welts after sea swims. They hurt, they’re itchy, but now I know what they are they won’t stop me.

I'm covered in sea lice stings again now after my six-hour sea swim, which was accompanied by jellyfish, birds and kingfish. It was extremely rough and I battled a current the whole way.

But I might be the first police officer. We’ve inquired with Police Sport and the Police Museum but nobody can confirm it. I’d love to hear if anyone knows otherwise.

Previous
We ♥ Loves-Me-Not
Next
Women answer the call