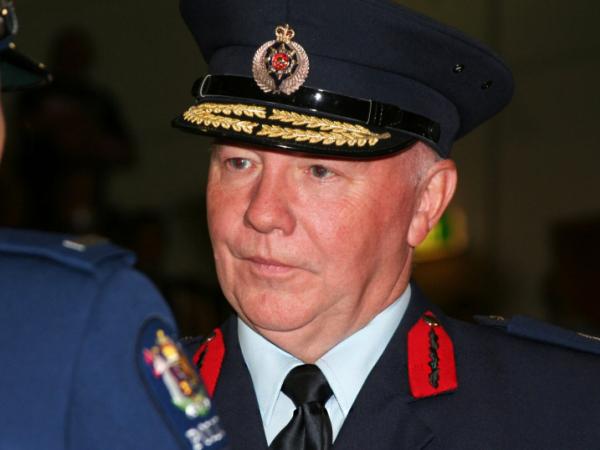 Mike was patron of Wing 266, which graduated from The Royal New Zealand Police College (RNZPC) in May 2011.

He was one of two men killed when a twin-seater aircraft crashed in the Tararua Ranges north of Wellington on Sunday.

Detective Oliver Crellin, of Waikato District, won the Patron’s Award with Wing 266. He said he saw news of Mike’s death on the TV news, with the pounamu Mike had presented to him at graduation hanging on the wall nearby.

He says demands on Mike’s time – including leading the Fire Service response to the February 2011 Christchurch earthquake, which struck while Wing 266 was in training – meant he was not able to spend as much time with the wing as he wanted.

He was, however, an inspirational mentor. “I remember hearing about his background and recognising how much he had achieved during his long career, and the changes he managed to implement,” says Oliver.

“What really stood out for me was when he spoke to us, at around the time of the graduation, about how proud he was of the unity of the Fire and Police and Ambulance services, working together to serve the community after the earthquake.”

The pounamu was blessed and passed around the entire wing before Mike placed it around his neck at the graduation ceremony.

“I wear it at times of importance, when I’ve gone to another member’s funeral or other events,” he says. “Recently I wore it for my detective qualification. Otherwise it has pride of place on my wall.

“It’s something that holds great importance for me.”

Inspector Sean McManus, Manager School of Initial Training in 2011, says Mike was open about not knowing much about policing but, with his vast fire service experience, was able to connect with Police and its values.

“One overriding memory for me is his focus on integrity within Police being critical to us being able to fulfil our role,” says Sean.

“Another is his pride in what he had achieved and the opportunities his career had given him. He used his own career to frame his approach to being a patron.”

He presented an antique fire helmet to the RNZPC - "a rare and special thing," says Sean.

In his notes for the 266 graduation booklet he wrote that he felt greatly honoured to be patron.

“We are extremely fortunate, in New Zealand, to enjoy the very real benefits of a police service known and respected internationally for its professionalism, competence, independence from politics, and freedom from corruption,” he wrote.

“Such qualities are essential components of a true democracy.”

Mike started his fire service career in Manchester in 1969. He moved to Queensland Fire and Rescue Service in 1974, helping establish organisational and cultural reforms.

In 2001 he became the first non-Kiwi national to head New Zealand’s Fire Service, and again set about a reform programme.