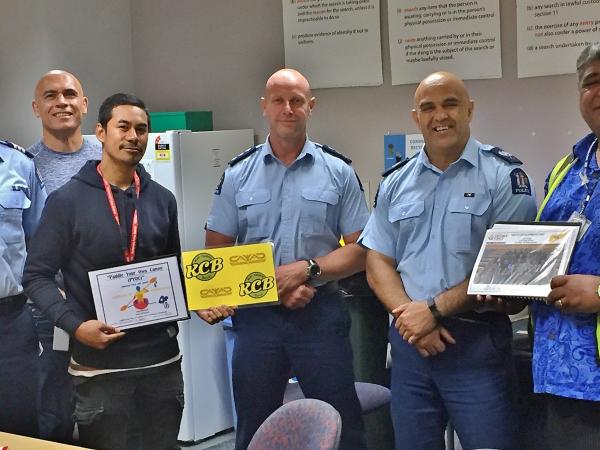 Home > News > Ten One Magazine > Paddling toward a brighter future

A young man who pointed a BB gun at a security guard after being kicked out of a bar can aim higher in life after completing a life skills course instead of facing court.

Josh Lepoualii was charged and came to the attention of Sergeant Mark Hagan, Senior Prosecutor and Diversion Officer on the North Shore.

Diversion was being considered and Mark thought Josh was a good candidate for PYOC, which stands for ‘Paddle Your Own Canoe’, or alternatively ‘Prepare Your Own Choices’.

The 12-week programme sees candidates mentored and encouraged to reconnect with their communities through activities including joining wardens on their rounds.

Josh went a step further and attended a Limited Service Volunteer (LSV) course – and is now considering an Army career.

“Many young people make stupid mistakes which can affect the rest of their lives and, if not resolved, can lead to further offending which puts them into a system they find difficult to escape,” says Mark.

“The ability for police to work in partnership within diverse communities is transformational and I acknowledge the effort that the whole of Police and our communities are putting into these initiatives.”

Josh says through PYOC Robert counselled him on issues including setting life goals, drugs and alcohol and associated issues such as violence. They also went out on night-time patrols with the Pasifika Patrollers.

He applied for LSV with Robert’s encouragement – and found the six-week course at Burnham Camp, near Christchurch, transformational.

Josh - one of the youngest on his section, turning 19 during the course – says he was inspired and motivated by the attitude of older participants.

“There were a lot of people there with gang affiliations and I thought if these guys could remove themselves from that and change their mindset then I can do it myself,” he says.

Mark has referred more than 20 people to PYOC but Josh was the first to have a formal graduation – held at North Shore Policing Centre - since they decided to do more to celebrate candidates’ success.

“Josh showed the group photographs and certificates he obtained in completing the LSV course, including first aid and NZQA,” says Mark. “He had prepared some notes and gave a speech about what a difference it had made for him.”

Robert says Josh is “an amazing young man” to have taken on the LSV commitment, extending his PYOC programme.

He says PYOC plugged a gap in services available on the North Shore but was a model which could be replicated anywhere, with the right support.

His PYOC role is voluntary, extra to his job with Māori health provider Raukura Hauora o Tainui, but he says it is a professional ‘after hours’ service drawing on his professional skills, life experience including time as a soldier, and Pasifika heritage.

“It’s a successful programme because I can work around people’s hours,” he says. “The relationship with Police is good because I understand what Police need and what works for the client.”

Robert says potential partners who want to work with PYOC or support its work can contact him on PYOC1966@gmail.com.

Alternative Resolutions are part of Evidence-Based Policing, a workstream of our transformation programme The Safest Country - Policing 2021.
Previous
AOS stalwart honoured for service
Next
The right tools for the job