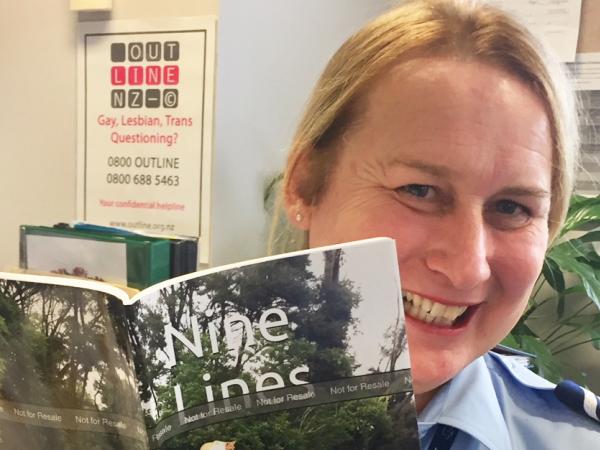 Away from her work in the prosaic surroundings of North Shore District Court, Sergeant Rhona Stace is a poet.

Earlier this year she published a book of haiku - Nine Lines - and is working on her second collection, Tea for Two.

Last week she learned that Green Tea, a poem from the collection in progress, had been selected to appear in the New Zealand Poetry Society’s 2018 anthology.

And two haiku from Nine Lines have been listed in the top ten in 100 Best Hooked On Haiku, a publication of the best entries from an international competition.

Rhona says she was at a crossroads in her life and looking for a way to rekindle her creative spark when her mother, children’s author Glenys Stace, suggested she try haiku.

“The only thing I got to level 3 in was English literature, and I tended to focus on the poets,” says Rhona.

“That fell by the wayside as I got more focused on my Police career, having kids and all the stuff that goes with it.

“It was when I started dealing with my gender issues and came out to my parents that I started revisiting some of the things I’d done previously.”

Rhona says she found the format of haiku - a Japanese form of three lines of five, seven and five syllables – a challenge and a spur.

“Three lines suited my attention span,” she says. “I really liked the idea of putting some quite tight, disciplined parameters on the creative process. I find you’re much more creative when you stick within such limits.

“I got hooked very quickly once I decided to give it a go. I just wrote about what I was seeing out of my window over a period of about 12 months.”

She found a lot of her haiku seemed to group together thematically in threes and decided to make the whole collection into triptychs – hence the title Nine Lines.

At first she stuck rigidly to the traditional haiku themes of nature and the seasons but then widened her scope. “I found I could apply it to people I knew, or other situations or personalities. A few were written with a certain person in mind.”

Green Tea is a tribute to another literary Stace relation – the poet Jeanette Stace – and was the title of a posthumously published collection of her works.

The other poems in the new collection include traditional haiku, alongside modern variations on the form, sonnets and free verse.

“It’s a bit of a mixed bag, with a wider range of topics. I’m still working on that one.”

Beyond the Blue is an ongoing project to highlight the diversity of ways Police staff spend their time away from work.