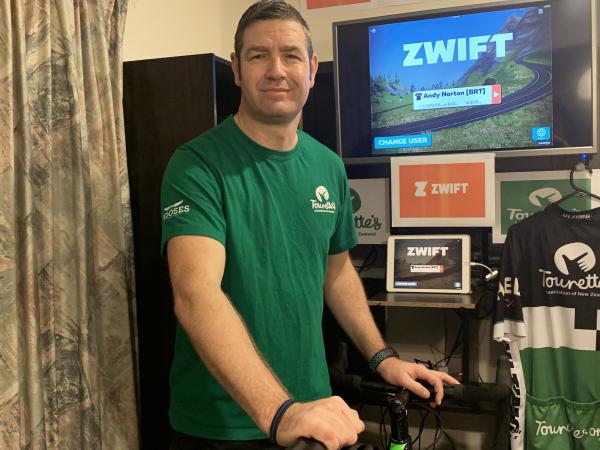 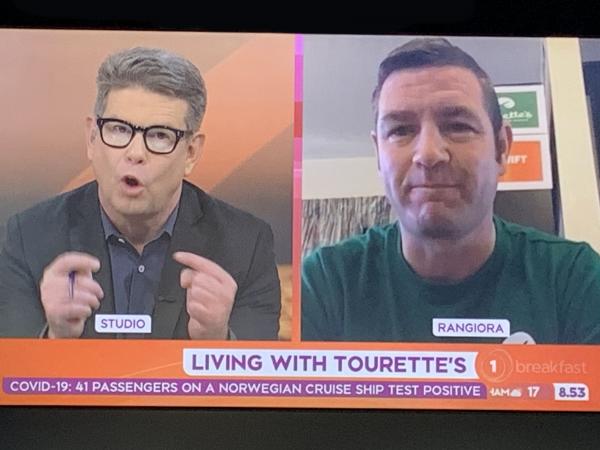 Home > News > Ten One Magazine > Saddling up and staying home

Sergeant Andy Norton is preparing to cycle hundreds of kilometres - without leaving home.

Andy, who is based at Waimakariri, Canterbury, is saddling up for a 24-hour cycle ride to raise awareness and funds for the Tourette’s Association of New Zealand.

He doesn’t have an enormous home: rather he will be using the virtual cycling platform Zwift - “a real bike, real kilometres, real effort, just in a virtual setting and in a warm safe environment,” he says.

The ride begins at 7pm on Friday 14 August. Before he crosses the virtual finish line 24 hours later, he will have been pedalling for at least 22hrs 30 mins, having allowed himself no more than a 15-minute break every four hours.

“I have three targets,” he says. “First 247km, because those with Tourette’s live with and deal with it 24 hours a day, seven days a week.

On and off his cycle, Andy is a keen supporter of the Tourette’s Association of New Zealand.

He has visited Camp Twitch – the association’s annual camp for children and young people with Tourette’s – and spoken about his own experience of dealing with the condition.

“The association is a charity and as such relies on donations, community grants and fundraising to support its fantastic work to support people in our communities with Tourette’s, and provide education to others,” he says.

“Camp Twitch is somewhere children and young people with Tourette’s and their families spend a week in an environment where they can be themselves - without having to worry about less-understanding members of society who stare and talk.

“While the camp is partially subsidised for families, there are still those who can’t afford to go. I’m riding to raise funds to help more families attend, and to contribute with the running costs of camp.”

Using Zwift, Andy will be pedalling through a virtual environment – he’s planning on choosing a Hawaiian-type landscape which probably won’t be much like Waimakariri in winter.

The app allows riders to cycle virtually together – Andy says he would welcome the virtual company of fellow Zwifters who would like to seek him out through the app.

Details of how to donate can be found on Andy’s Givealittle page.

To find out more about the Tourette’s Association, including details of other ways to support its work, visit their website – tourettes.org.nz
Previous
On the road to a better future
Next
Nau mai, haere mai Commissioner