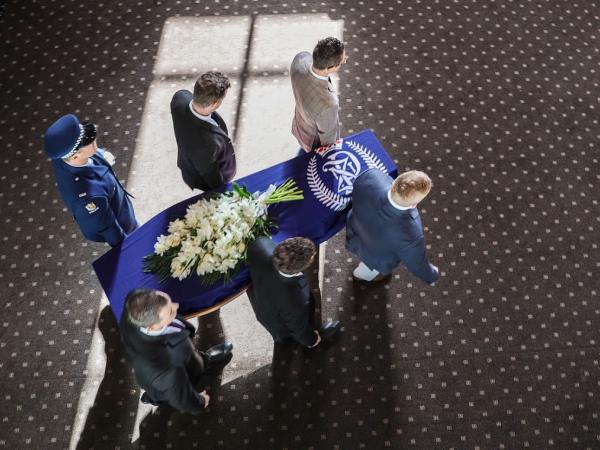 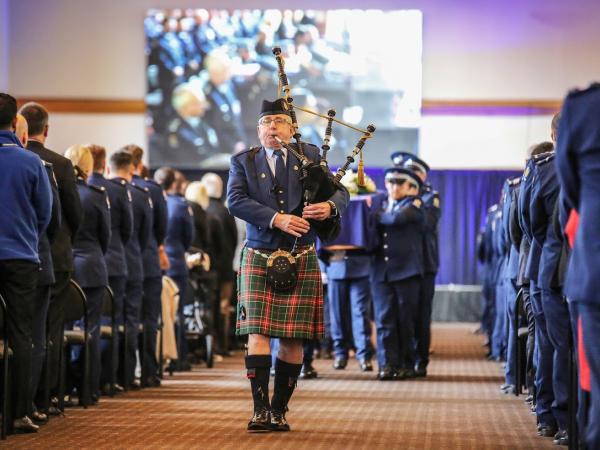 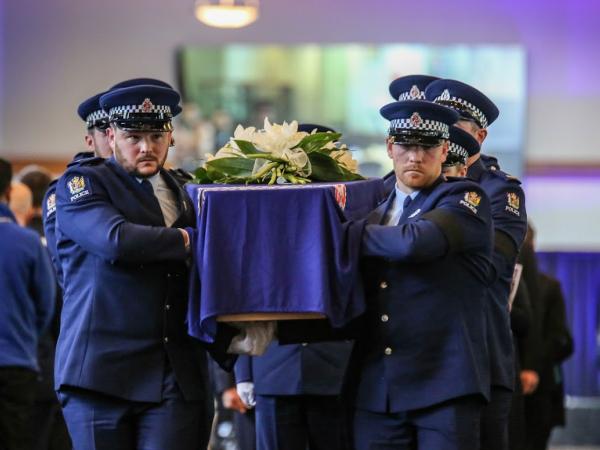 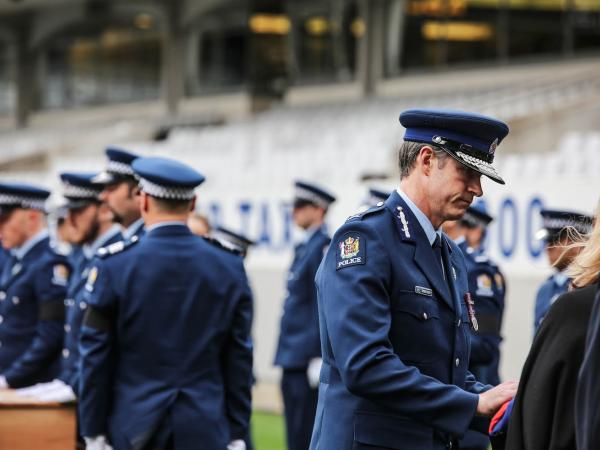 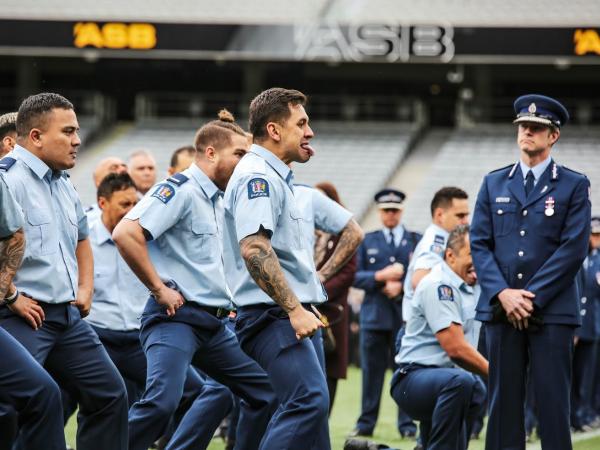 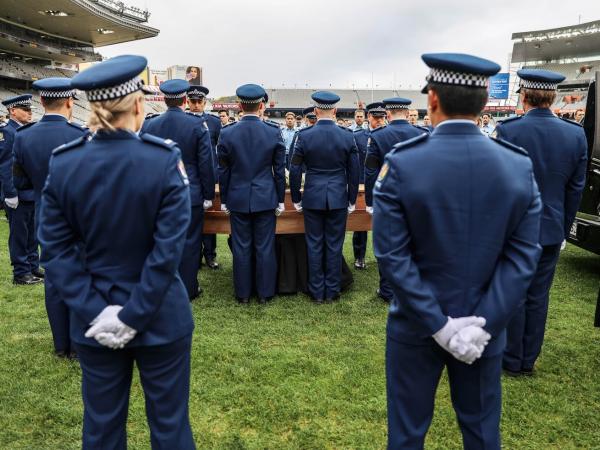 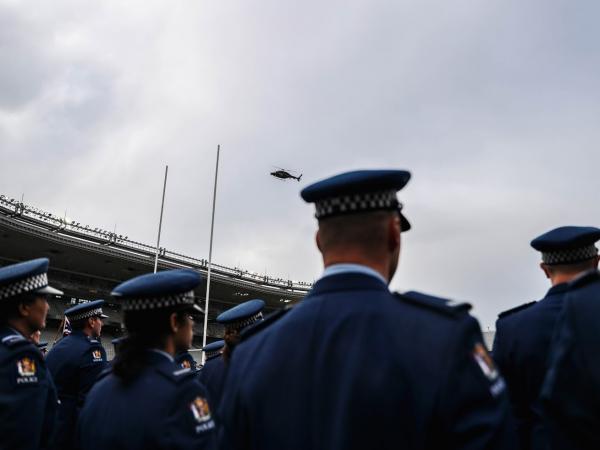 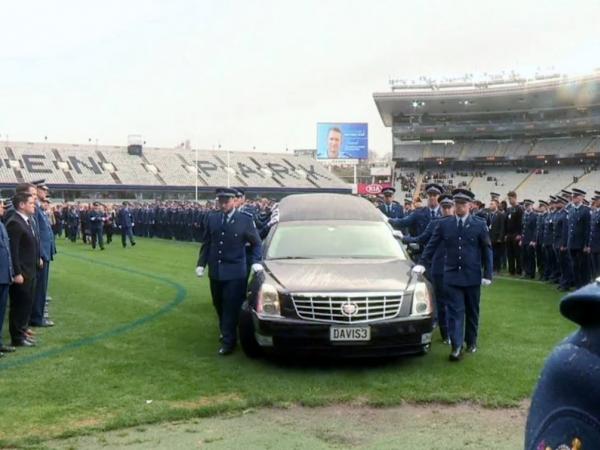 Home > News > Ten One Magazine > 'We, together, will never forget him'

The Police family gathered today to farewell one of our own.

An estimated 1500 members of Police staff gathered at Eden Park, Auckland, with the loved ones and friends of Constable Matthew Hunt – a day short of three weeks since his death.

There was a guard of honour, a Police haka, dogs, a piper and a salute from the Eagle helicopter as the cortege arrived and departed.

Inside there were tears and laughter as speakers paid tribute to a son, brother, nephew, friend and valued colleague.

Commissioner Andrew Coster led the Police tributes. Also speaking was Sergeant Dean Taylor, Matt’s supervisor in his home town Orewa for most of his two years, eight months of service.

Commissioner Coster said Matt’s death had touched all New Zealanders. He pledged that Police would honour his memory by continuing to serve our communities in the same spirit that Matt brought to his work.

“We, together, will never forget him,” he said. “We will continue to honour his life, his service and kindness to others, his integrity, his generosity; and we will honour it for generations to come.

“We will do this in the way we go about our business, with the courage and compassion that Matt showed as he made his contribution to building a safer country for all who live or visit here.”

Commissioner Coster said while part of the satisfaction of policing lay in dealing with the unexpected, it also brought danger. He quoted the minister at the funeral of Constable Jim Richardson, who was shot dead in Lower Hutt.

“In 1963 the minister at another Police funeral said this: ‘We are reminded that there is a price to be paid for upholding the law. We are not always mindful of how much the police are required to give’.

“On 19 June we saw the terrible truth of those words. We are appalled by the senseless taking of a young life in the sort of circumstances which keep us awake at night.

“But the job of policing goes on. Every day and night, women and men put on the uniform as Matt did, and go out there as Matt did – not knowing what the shift will bring, but knowing that their actions will make a difference.”

Among the mourners were Prime Minister Jacinda Ardern, Police Minister Stuart Nash and Matt’s colleague who was injured in the shooting on 19 July.

“Matt was a humble guy - he wouldn't have wanted any of this fuss,” he said. “However Matt, on this occasion you deserve all this.”

He remembered Matt as quiet, methodical and eager to learn. He was a perfectionist in his work and very particular about his appearance and, said Dean, had a fan club among the regular female clients at Orewa – including one who said she’d had her eyebrows done for him.

He was a great communicator who rarely had to use tactical options, preferring to negotiate: “In two-and-a-half years of frontline police work I believe Matt has only had to write one tactical options report”.

Matt’s ambition was to join CIB. Dean said he had been tackling increasingly complex investigative work and left Orewa shortly before his death to broaden his experience of policing at other stations before applying for CIB induction.

“That was Matt – humble, caring and proud. He made an impression on all who met him. He was so proud of wearing the uniform.

“I just want to finish by saying: Matt, rest in peace. I’ve got the team – you will not be forgotten.”

Three of Matt’s closest friends shared their memories of him, from the ‘goofy little kid with purple-framed glasses and a questionable hairstyle” on his first day at school to the impeccably turned out young man “who had no idea how handsome he was”.

They recounted adventures at university, backpacking through Europe to the 2015 Rugby World Cup, flatting together, weddings, golf and lawn bowls. It was fitting to be at Eden Park, where they had spent happy times together watching rugby.

Matt’s uncle Robert Winterbottom and sister Ellie shared their own memories. He had “found his forever family with Police”, said his mother Diane.

“Every day, in every way, you made me so, so proud to be your mother,” she said.

At the end of the service, Police pallbearers carried Matthew’s coffin out into the stadium, where the seat he occupied on his last visit, a few days before his death, has been designated a seat of honour in his memory.

On the pitch the flag from the coffin was carefully folded and presented to Matt’s family by Commissioner Coster. Hundreds of colleagues performed a haka and the cortege pulled away, led by a piper, behind the goalposts and between the lines of appropriately impeccable blue uniforms.

Moe mai rā Matt - you will not be forgotten.