Since 1964 New Zealand Police have sent staff to work in Europe, Africa, southern Asia, Antarctica and Asia-Pacific. Below is information about overseas operations completed before current deployments.

Timor-Leste was colonised by Portugal for centuries until civil war in 1974, when Portugal withdrew to allow Timor-Leste to become an independent state. When the Revolutionary Front for an Independent Timor-Leste (known as Fretilin) declared the country's independence in 1975, Indonesia invaded and declared Timor-Leste an Indonesian province.

The Timorese mounted resistance to the Indonesian occupation that lasted for 23 years until 1999, when Indonesia agreed to put the issue of independence to the vote. The Timorese voted for independence. This sparked a rampage by Indonesian militias in which about 1000 people were killed.

Australia led a UN backed force to help quell the violence. In October 1999 the United Nations Transitional Administration in Timor-Leste was established to run the territory and prepare it for independence. A political Assembly was elected, a Constitution was written and in May 2002 Timor-Leste became an independent nation under President Xanana Gusmao, a former resistance leader. 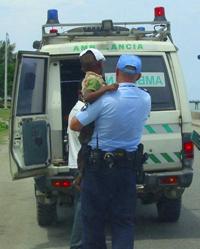 In 2005 the UN and foreign peacekeepers pulled out of Timor-Leste. Nine months later a serious rift had developed within the 1400 strong Timor-Leste Defence Force (F-FDTL). Half the force complained of regional discrimination which affected who was and was not promoted. The Prime Minister sacked 600 soldiers who had petitioned against discrimination. A number of the sacked soldiers formed rebel forces which included youth gangs. There were several violent armed clashes with F-FDTL troops.

On April 28 2006 a rally in support of the petitioners became violent when youth gangs joined in and security forces fired into the crowds. Five people were killed and 21,000 inhabitants of Dili fled their homes. On May 24 2006 Timor-Leste asked for help from Australia, Malaysia, Portugal and New Zealand to quell the unrest.

Two days later F-FDTL attacked the Police Nacional de Timor-Leste (PNTL) at the Police HQ in Dili. During the incident, F-FDTL fired on police after they had surrendered their weapons and were walking from the building under UN escort. Nine police officers were killed and others seriously wounded.

After these events Australian and New Zealand troops and police deployed to Timor-Leste in peacekeeping roles. Shortly after that the UN returned to start the United Nations Integrated Mission to Timor-Leste (UNMIT).

During 2007 frustrations rose at the inertia of UNMIT, the growing lack of confidence in UNPOL and the disconnection between UNPOL and PNTL. After concerted effort by the New Zealand Ambassador to Dili, the Special Representative to the Secretary General of the UN agreed that New Zealand would manage a Community Policing Project in two distinct areas of Timor-Leste as part of UNMIT.

The Community Policing Project started in October 2008 and finished in June 2010. An independent review of the project found that it had made a contribution to community policing in Timor. Between June and October 2010 the New Zealand Police contribution to UNPOL/UNMIT reduced from 25 to 10 personnel. In June 2011 this was further reduced to five, and remained at this level until the end of the mandate in 2012, when staff returned to New Zealand. 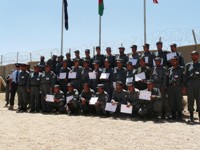 Afghanistan, after many years of armed conflict against various adversaries, is now an autonomous state exercising democracy. However, political and economic life and society are in disarray.

The international community is committed to helping Afghanistan rebuild a functional state.

Restoring law and order is one of the primary building blocks of community and state restoration. Rebuilding a professional police service which operates under the principles of democratic policing and respect for human rights is the foundation of this process.

Before the arrival of international assistance, virtually no police officers had been formally trained over the preceding 25 years. A large proportion of the force is illiterate.

Germany initially took the lead in the Police Reform Project and was responsible for:

The United States Department of State (International Narcotic/Law Enforcement Program) later took ownership of the in-service training of police staff across Afghanistan. They established a number of Regional Training Centres across Afghanistan and invited other nations to contribute to the training effort. 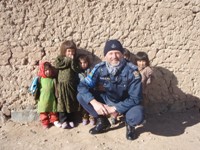 New Zealand Police took part in the police mentoring section of that programme. Involvement focused on training delivery at the Bamyan Regional Training Centre, as well as mentoring assistance to the Provincial Police Chief and a small number of senior officers.

The main focus of work under EUPOL AFG was to continue the work of the civilian police project started by the Germans, and to concentrate on improving the capability of the Afghan Police. This will bring them to a standard where they are able, together with other Afghanistan security forces, to take the lead responsibility for security in Afghanistan.

In December 2010 New Zealand Police staff in Afghanistan increased from three to five, to help in the hand-over of responsibility for security to Afghan Police and to provide district-based training.

In December 2012 the New Zealand Police mandate to remain in Bamyan expired and the final contingent of four staff returned to New Zealand.

During the programme, 53 New Zealand Police staff served in Afghanistan.

Over 100 New Zealand Police officers were deployed to Phuket, in rotations of varying size, to support the process of identifying victims of the Asian tsunami of 26 December 2004.

Operation Overdue was the New Zealand Police response to the Air New Zealand TE901 crash on Mt Erebus on 28 November 1979. A police team was deployed to Antarctica to recover the bodies of all passengers and crew. The Disaster Victim Identification operation continued at Auckland mortuary until February 1980.

Following a request from the United Nations, New Zealand furnished a volunteer force of 20 police officers for peace-keeping duties in Cyprus during a period of serious fighting between Greek Cypriots and Turkish Cypriots. The unit was stationed in Limassol, where it acted as liaison between the Greek Cypriot and Turkish Cypriot police and aided with investigations.