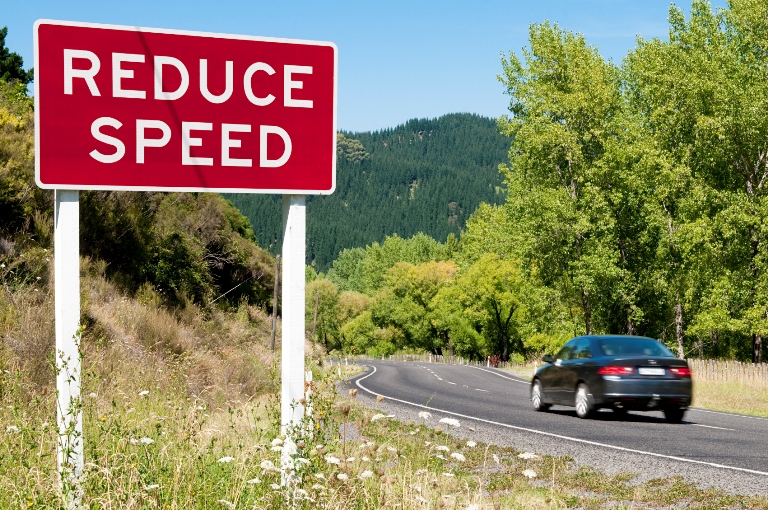 Police focus is on ensuring people are driving safely and to the conditions.

Police decisions about speed enforcement are based on evidence. You might feel safe driving a few kilometres over the limit but extensive research from New Zealand and overseas shows a small increase in speed raises the crash risk for all road users.

In general, the speed limit for cars on main rural roads and motorways is 100km/h, and 50km/h on urban roads – unless signs say otherwise. However, driving safely means driving to the conditions. ‘Conditions’ doesn’t just mean the weather – it includes the road you’re on, the roadside around you, traffic conditions, your vehicle and load, and even you – for example, are you tired or on medication that affects your driving?

Driving faster than the posted speed limit is illegal. Police have the discretion to issue you with a speeding infringement notice (speeding ticket) if you drive at any speed over the limit.

Police understand the frustration caused by slower drivers who speed up when entering passing lanes, but this does not create an excuse or mandate for exceeding the posted speed limit. While police take a more pragmatic approach when enforcing speed on passing lanes, the few seconds saved passing an irritating vehicle are simply not worth the risk.

Why is the speeding threshold lower at holiday weekends?

Police focus is on preventing harm on our roads. A lowered threshold for official holiday periods was introduced at Queen’s Birthday Weekend, 2010 to slow and calm traffic during these busy times to reduce crashes and trauma on our roads.

Data suggests the approach is having a positive effect on road safety. The percentage of drivers travelling past safe speed cameras at more than 100km/h was lower during the 2012/13 Christmas holiday period (when the lowered threshold was in place), compared to year round. Additionally, the number of drivers exceeding 100km/hr has been decreasing each Christmas holiday period with a lowered speed threshold.

A review of evidence from speed studies in various countries showed that a decrease of 1km/h in mean traffic speed typically results in a 3% decrease in the incidence of injury crashes, or a decrease of 4-5% for fatal crashes (World Health Organisation 2004 report).