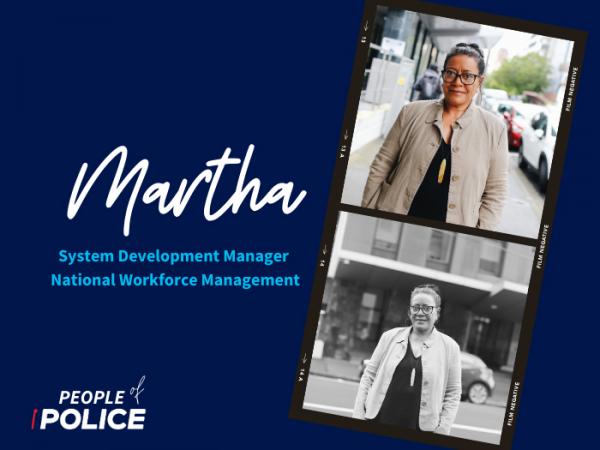 Inspired by the Humans of New York photoblog, we’re showcasing some of the incredible stories and experience of people throughout our organisation – both sworn and non-constabulary staff - in our new series, People of Police.

Before joining Police, I worked mainly in the entertainment industry. Firstly, as a Wellington reporter for Tagata Pasifika, then as a radio announcer for Access Radio and Atiawa Toa FM.

Music has always played a big part in my life, from writing the theme song to TVNZ’s Tagata Pasifika and being a Ronette in the musical production of Little Shop of Horrors at Downstage Theatre, through to assisting with translating and recording a parody of the movie Moana for USA company Screen Junkies and recording an adaptation of a Wild Wet Wellington Wind by Joy Cowley with the late Bruno Lawrence.

I also had the opportunity to sing on an L&P commercial and on the movie Sons for the Return Home, based on a novel by Albert Wendt.

I am of Tokelauan and Samoan descent and New Zealand Police has given me opportunities to make a difference. I am part of the Diversity Liaison Officer network, Bluelight and the Wing It choir, which is made up of staff from Police National Headquarters, in Wellington.

Outside Police, I was a trustee then deputy chair for the National Pacific Radio Trust which broadcasts 531PI and Niu FM.

I currently front my very own television show for Oriana TV called Who Runs The World - a music show featuring Pacific Women in music, which screens every Sunday at 10.30pm on Freeview Channel 200 (Kordia TV).

Today, I am part of the National Workforce Management (WFM) Team at Police National Headquarters. Our purpose is to support our District WFM teams.

The redeployment of staff on 15 March 2019 was one of those major operations I hope to never see again, but it was testament as to why I work for this organisation - because when all hands are required on deck, our people mobilise to get the job done.  The willingness of the entire organisation to assist in deployment just proves to me why I, like everyone else in this organisation, want to make a difference in our community.

Previous
Peace of mind after 43 years
Next
Diversity in harmony