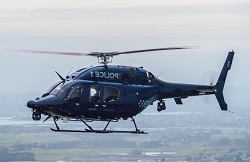 The primary use of the aircraft is as an airborne observation platform. From their vantage point in the sky the crew are able to readily coordinate the operations of ground units. This is particularly valuable where persons of interest are still present at an incident, either on foot or in vehicles. Once the aircrew have visual contact with these people, or targets, they are able to manoeuvre the ground units into position to best deal with the incident, or make an arrest.

The Air Support Unit has been in operation since 1988. Originally based at Mechanics Bay on Auckland's waterfront, the operation moved to Onehunga and its current location in July 2019.

In 1988 the original aircraft was a Bell Jet Ranger helicopter. In July 1989 this was replaced by two twin engine Aerospatiale AS355F1 helicopters. These two aircraft provided service to the New Zealand Police for the next 28 years. A third AS355 was added to the fleet in 2017 which coincided with the Air Support Unit going 24/7.

In July 2019 New Zealand Police replaced the AS355 fleet with three Bell 429 helicopters to meet current and future needs.

The aircraft are equipped with gyro stabilised binoculars, which are used to counter the effects of vibration in the aircraft.  Forward looking infrared (FLIR) camera, night vision equipment, and a night sun spotlight.

Eagle also has a comprehensive array of VHF and UHF radio equipment for communication with Air Traffic Control, Police, Fire and other agencies. For navigation the aircraft is fitted with global positioning system (GPS) equipment which is integrated into a mapping program.