The introduction of mug shots in New Zealand

One common element in many mug shots, however, is the display of prisoners’ hands. In 1886, the introduction of fingerprinting in New Zealand was still nearly two decades away, so the inclusion of hands in mug shots provided an additional point of identification for police. Missing fingers, scars, and the general shape and condition of the prisoners' hands could all help in the identification of a suspect.

In 1903, Police Commissioner Walter Dinnie organised a comprehensive system of criminal registration for the New Zealand Police, in an attempt to modernise and professionalise policing in the country. His new system required photographs, handwriting samples, reports, associates, and operating habits to be collected from every criminal arrested in New Zealand. His son E. W. Dinnie, who had been trained in the United Kingdom in these modern methods of criminal identification, was named Finger-print Expert and Photographer. Throughout 1904, the young Dinnie worked closely with the New Zealand prison administration to refine the record keeping system, particularly the photographic files. This resulted in new, more elaborate criminal identification forms, which included a place for fingerprinting details. 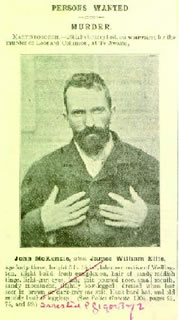 From 1904 it became a standard police responsibility to take mug shots of all prisoners. A list of New Zealand policemen who owned cameras and/or were acquainted with photography was drawn up. In areas where there were no policemen available for taking mug shots, commercial photographers were still relied upon. The Policemen-photographers were paid for each photograph, or compensated by being exempted from night duty.

In April 1904, the Police Gazette (a monthly bulletin circulated to all police in New Zealand) also published its first mug shot- a photograph of wanted criminal John McKenzie, a convicted rapist who was wanted for the murder of his former employer.

In 1912 the Prisons Amendment Act officially sanctioned the use of mug shots, by declaring that all accused or convicted prisoners incarcerated for the first time had to submit to being photographed and fingerprinted, including by use of ‘reasonable force’ if necessary. By 1913 it was reported that over a thousand photographs of prisoners had been taken at Police Headquarters in Wellington, and approximately two thousand had been taken elsewhere in New Zealand.