Physiognomy, Photography and the criminal look 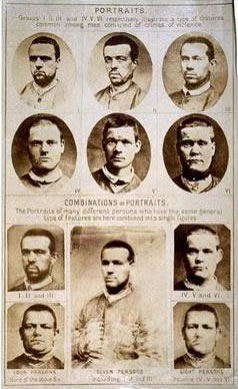 Although mug shots alone failed to provide a reliable system of criminal identification in the 19th century, some tried to find alternative uses of mug shot photography. One of the most salient examples of this was the 'science' of physiognomy. Physiognomy is the study of a person's physical characteristics - especially their face - to try and determine things about their personality. Although it was widely discredited during the 20th century, during the 18th and 19th centuries it was a legitimate and respected science. Many hoped that this study of faces could be used to pinpoint a 'criminal look' which could help police identify criminals - perhaps even before they committed a crime.

Physiognomy also had a direct link to the development and use of mug shots in the late 19th century. Sir Frances Galton (1822-1911), who is best known for his innovations in the science of fingerprinting, studied the potential of mug shots to reveal the ‘look’ of criminality. He layered mug shots of certain ‘types’ of criminals (such as smugglers, thieves, arsonists, etc.) into composite photographs. He hoped that by combining their faces, he would be able to identify facial features that indicated criminal tendencies.

Galton was the first to use mug shots in this way, but he wasn't the first to study the face to try and identify the 'criminal look'. For example, Johann Kaspar Lavater (1741-1801) was a Swiss poet and physiognomist who published Physiognomische Fragmente zur Beforderung der Menschenkenntnis und Menschenliebe in 1775-78. In this popular book, he claimed that a person's facial characteristics reflected their 'temperament' or character (see image below).

Building on this idea, 19th century criminologists like Cesare Lombroso (1835-1909) even identified some specific characteristics which might indicate criminal tendencies, such as: 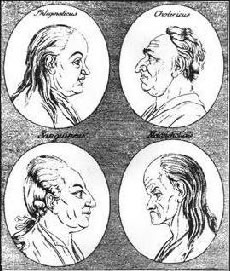 “The Four Temperaments”, Johann Kaspar Lavater, ca. 1784. Lavater felt that a person’s character or temperament was reflected in their general facial features.

Lombroso claimed that criminality was inherited, and those who were 'born criminal' could be identified by these sorts of physical defects. Although it may seem like a laughable concept today, physiognomists thought that one day we would be able to look at a photograph of a person and be able to tell if they were a criminal, and even what types of crime they were capable of.

This idea that someone's physical look reflected their inner character and personality traits evolved out of another popular pseudo-science of the 18th and 19th centuries: phrenology. Phrenology is the study of the shape of the skull, based on the belief that its bumps correlate to parts of the brain. Phrenologists studied the faces and heads of people in order to try and reveal their behaviours and personality traits

In New Zealand, phrenologists even occasionally attended the executions of criminals in order to make plaster death masks. By studying the facial characteristics and skulls of these masks, experts hoped it would reveal insight into their criminal tendencies. For example, death masks of the notorious Burgess gang - Richard Burgess, Thomas Kelly and William Levy - were taken by a phrenologist named A. S. Hamilton at their executions in Nelson on 5 October 1866. Hamilton was allowed to study the men in prison before they were hanged, and to attend the executions.
Burgess was even interested in this process, requesting that the death mask be taken before his execution, in case his face was distorted after death.