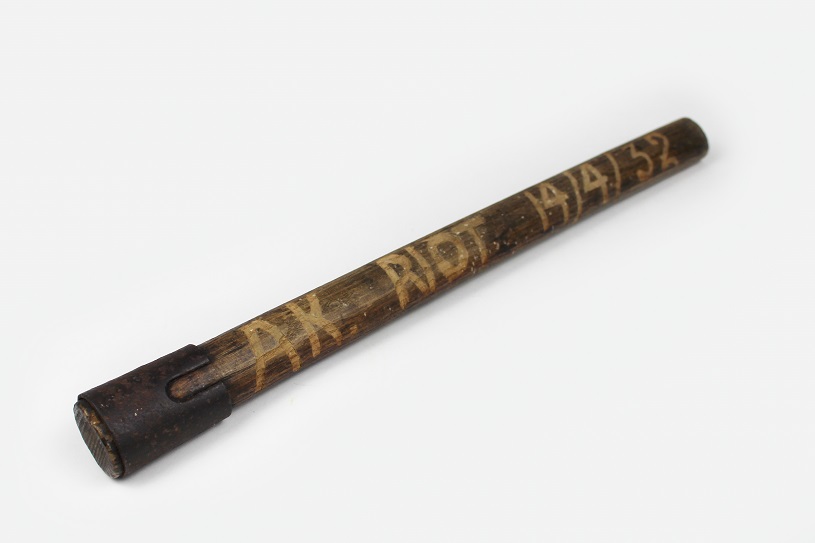 During the Great Depression of the 1930s, there were a series of riots relating to unemployment throughout the country. The incidents, known as the 1932 Depression Riots, took place in Dunedin, Christchurch, Wellington and Auckland. The Queen Street Riot that began on the afternoon of 14 April 1932 remains one of the most violent incidents in Auckland’s history.

The riot was incited by a civil servants meeting that was being held at Auckland’s town hall to discuss wage cuts. The hall could only hold a maximum of 3000 people, yet the crowd of people outside totalled more than 15,000. This included unemployed workers who had joined in to protest. There were 30 police officers on guard to prevent people from entering the building after it had reached capacity.

Jim Edwards was one of the leaders of the Unemployed Workers’ Movement. He had been standing at the front of the crowd with a megaphone and was struck by a police officer with a baton. Edwards was not seriously injured but a rumour quickly spread that he had been killed. People were enraged and began attacking police with pickets torn from nearby fences. 21 of the 30 officers outside the hall were injured, three seriously.

The crowd then continued down Queen Street, throwing stones, bottles, rubbish bins and ‘No Parking’ signs through windows. They raided shops of jewellery, liquor, clothing and tobacco. Clothing store dummies were dragged out onto the street and stripped. However, one fruit store owner cleverly managed to prevent rioters from destroying his shop. As the mob approached, he stood outside the door with boxes of fruit and invited rioters to help themselves, which they did.

Mounted police used batons to try and control the crowd and restore order, but they were significantly outnumbered. The fire brigade, a naval detachment and Waikato army troops were all called in to assist. The reinforcements were still not enough and at 21:00, the Auckland Mayor appealed for all law abiding, physically fit men to report to the police station immediately with their own baton. There was an overwhelming response and not enough time for volunteers to be sworn in. They were sent out alongside police officers or in groups with white handkerchief arm bands as identifiers.

Violence continued throughout the night and the following morning 1,000 Special Constables were officially sworn in. The “Specials” were given police regulation armbands and batons. They were supposed to stand guard at intersections and guard shops with broken windows. However, many of them were said to be initiating the violence rather than containing it. They were also major targets themselves as rioters saw them as “scabs” (non-union workers). When the riot was finally over, there were 200 injuries, 250 glass windows smashed and 85 arrests, 83 of which resulted in convictions.