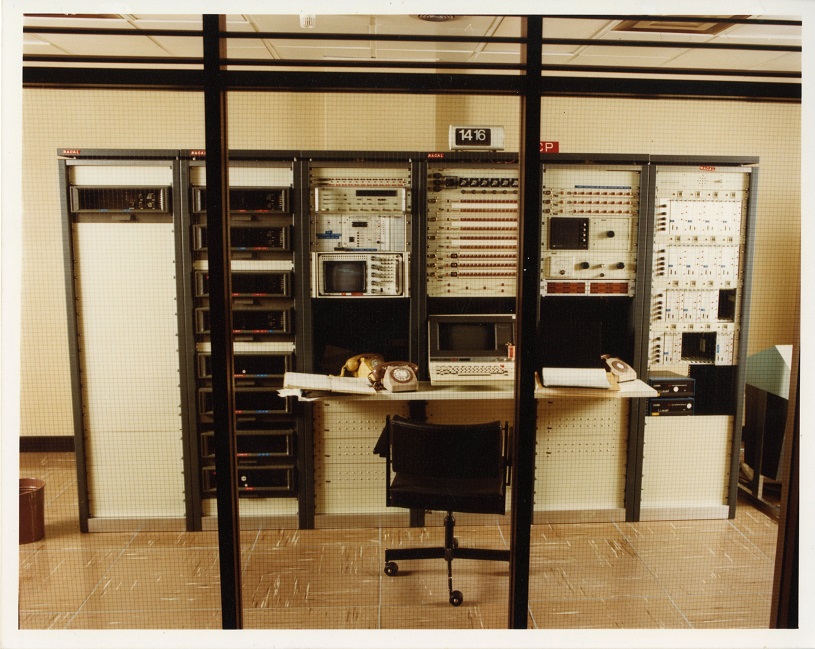 At a time when CCTV cameras, internet surveillance and digital data storage were virtually unknown, New Zealanders were deeply concerned with the development of a computer thought to be the country’s own “Big Brother.” The National Law Enforcement Database, known as the Wanganui Computer, was New Zealand’s first centralised electronic database. It allowed the Police, Transport and Justice agencies to efficiently record and share information about citizens. This information included vehicle registrations, drivers’ licences, firearms licences, traffic violations and criminal convictions. Police Minister Allan McCready described it as “the most significant crime-fighting weapon ever brought to bear” in New Zealand. The Database was created by the State Services Commission in 1976 and filled an entire multi-storey building, the Wanganui Computer Centre.

During the early 1980s, the protest movement in New Zealand was in full swing. Many protests were being held against Prime Minister Robert Muldoon’s policies and the 1981 Springbok Tour. New Zealanders protested against the government’s Wanganui Computer as they felt it breached their right to privacy. The most serious incident involved ‘punk anarchist’ Neil Roberts, who attempted to blow up the Computer Centre with a homemade gelignite bomb, killing himself in the process. Just after midnight on 18 November 1982, he walked up to the building with a carry bag over his shoulder containing the bomb. He detonated it as the two security guards on duty reached the intercom to ask him what he wanted. The explosion was felt for miles and could be heard throughout Whanganui. The security guards were protected from the blast inside their armoured glass cubicle and no-one else was injured.

Neil Roberts was a 22 year old chef from Auckland who had been involved in the protest movement for some time. He had been on the frontline for most Springbok Tour protests. Police discovered that the day before the bombing, he had spray-painted the anarchy symbol on a nearby public toilet block, alongside the words “We have maintained a silence closely resembling stupidity.” They also found a suicide note of sorts, scribbled on a piece of cardboard outside the public toilet. It said “Here’s one anarchist down. Hopefully there’s a lot more waking up. One day we’ll win – one day.” Roberts had the words ‘This punk won’t see 23 - no future’ tattooed across his chest. A coronial inquiry declared the bombing a suicide but it remains one of the few acts of political terrorism carried out in New Zealand.

Roberts’ attack was unsuccessful in destroying the computer and it remained in operation until 2005. The Wanganui Computer Centre closed in 1995 as government agencies began developing their own in-house systems. The Database was re-located to Auckland and all its information transferred over to the National Intelligence Application. Once this was completed, the Wanganui Computer was shut down. By this time, it was outdated, had become increasingly difficult to maintain and lacked the required functionality.

Roberts’ death was commemorated as ‘Neil Roberts Day’ on 18 November, 1986 by a group of punks who gathered in Moutoa Gardens. The gathering was held there annually until 1989, before interest waned in the 1990s. However, commemorations were revived in 2015 with a ‘Neil Roberts Day’ gig, hosted by Up the Punks in Duncan Pavilion, Whanganui. The event was held in November 2015, 2017 and 2018, with various punk bands from around New Zealand performing.