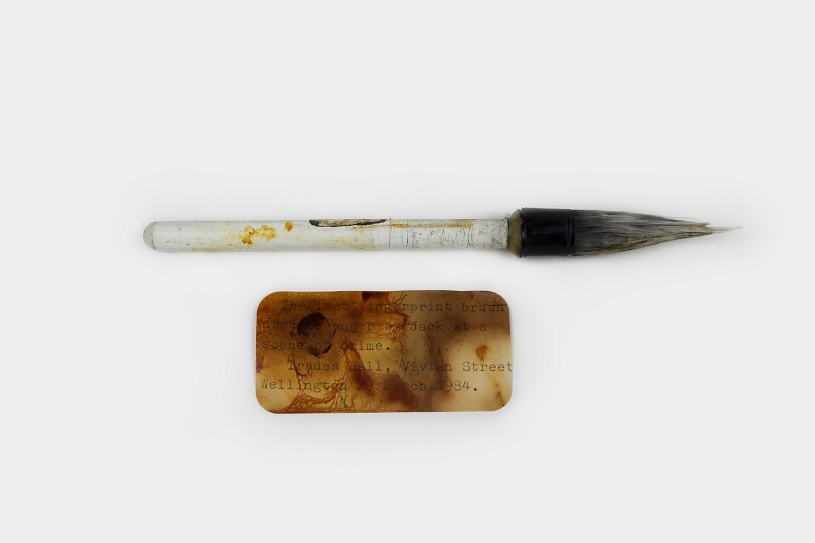 On 27 March 1984, Ernest Abbot was killed by a bomb hidden inside a suitcase that exploded at Trades Hall in Wellington. The explosion was so powerful that it blew the building’s front and back doors off their hinges. Cars parked outside were pushed back several feet and nearby shop windows shattered. Trades Hall on Vivian Street had been the city’s union headquarters. At the time, there was a strong anti-union feeling in New Zealand. There had been recent union meetings to discuss retaliatory actions to then Prime Minister Robert Muldoon’s wage freeze and Muldoon had made frequent verbal attacks against the union movement. Police were unable to identify a clear motive for the attack but the main theory is that the bomb was planted by an individual with a hatred for unions.

Ernie Abbot was sixty-three years old and lived in a flat above Trades Hall. He was the building’s caretaker, prior to which he had been in the Royal New Zealand Navy and served in WWII. He was a member of the Caretakers, Cleaners and Security Guards Union and had previously acted as the group’s vice-president. He noticed the suitcase had been sitting in the foyer outside the office of the Wellington Tramways Union since earlier that morning. He decided to pick it up and move it into his office, which immediately triggered a mercury switch on the device and it exploded. Ernie’s dog Patch was with him at the time and was sent flying into the street. Patch survived the blast and was later adopted by the daughter of the Trades Hall cleaner.

Within minutes of the explosion, police cars, fire engines and ambulances arrived on the scene. Bomb experts and sniffer dogs were called in to confirm there weren’t other incendiary devices inside the building. Police launched a wide-scale investigation into the attack, led by Detective Inspector Ted Lines. More than 3000 items were collected from the site for forensic examination and the wall around the building’s entrance was dusted for fingerprints. This fingerprint brush, part of a training kit compiled by Senior Fingerprint Technician J A Groves, is accompanied by a label which reads: The last fingerprint brush used in anger by Jack at a scene of crime. Trades Hall, Vivian Street, Wellington. 29 March 1984.

Police interviewed hundreds of people. There were several different reports of suspicious looking men loitering in the vicinity of Trades Hall that day. Yet none of these persons of interest ever came forward to police. The main suspect was a middle-aged man, seen earlier that morning on the corner of Taranaki and Vivian Street carrying a small suitcase. Police distributed over 1000 copies of a poster with a replica suitcase printed on it. This was a composite image based on witness descriptions. The consensus was that it was light green in colour, very worn and faded, and approximately 40cm in length. Police also recovered a piece of the original suitcase that had a rare Rica Banana sticker stuck on it. A reward of $25,000, increasing to $50,000 the following year, was offered to anyone with information leading to the conviction of whoever was responsible.

Ernie’s funeral was held in the Wellington Town Hall several days after his death and was attended by 2500 people. As a sign of respect, many union workers stopped work that day. He was later commemorated with a seat in the foyer of Trades Hall building, which the Carpenters’ Union made out of rimu salvaged from the blast. A tree was planted in his honour in Cobblestone Park. On 27 March 2014, a service was held at Trades Hall to mark the 30th anniversary of the bombing.

The investigation was renewed in 2018 by Detective Senior Sergeant Warwick McKee. Detailed in an episode of Cold Case that aired on 30 June 2019, it was revealed that the bomb had contained an accelerant likely to be petrol in a Teal fizzy drink bottle. The suitcase was also lined with pages 9, 10, 19 and 20 of the 18 June 1977 Evening Post. Despite police efforts at the time and the renewed investigation, the attacker has never been identified and the case remains unsolved.