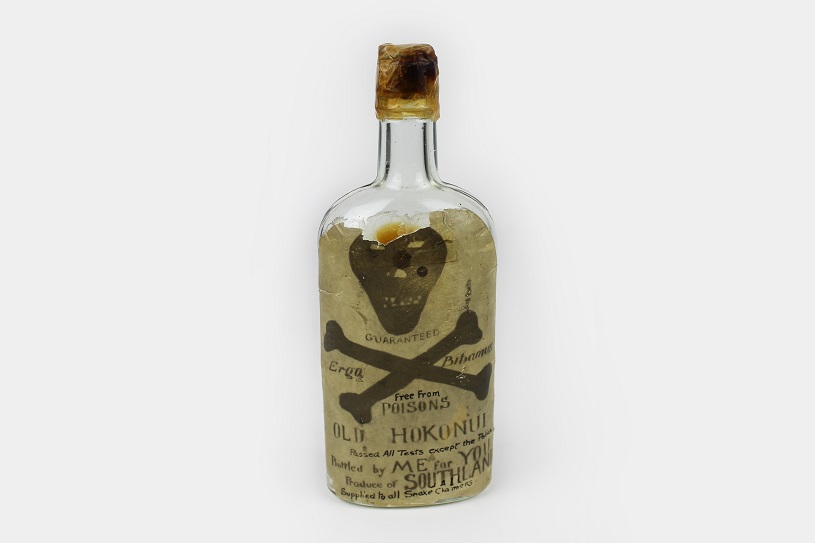 The McRae family, who produced the original Hokonui Moonshine, have gone down in history as New Zealand’s most famous whisky bootleggers. From the late 1870s onwards, the McRaes ran an illegal whisky distilling operation from Gore, Southland for more than seventy years. Mary McRae moved from the Scottish Highlands to the South Island of New Zealand in 1872, settling in the Hokonui Hills with her seven children. At the time, a licence was required for brewing or distilling alcohol in New Zealand and any sales were taxed. The McRae family started off by illegally manufacturing and selling whisky to doctors, lawyers and professionals who would be unlikely to report them to police. They also had a policy of not selling whisky “into any house where it would do harm.” Their highly sought-after product was said to compare with Scotland’s best, where whisky-making had been a tradition for hundreds of years. Their whisky was packaged in unlabelled and inconspicuous cans and milk bottles. The product became known simply as “Hokonui,” which eventually became the name used throughout Southland for any illegal whisky.

Temperance was a divisive issue among New Zealanders in the late nineteenth century, many of whom believed that alcohol was the major cause of poverty, sickness, family neglect, abuse and economic instability. Although the government imposed restrictions on the sale of alcohol, total prohibition was never introduced in New Zealand. Instead, people voted on whether to ban the sale of alcohol in their own district. Between 1894 and 1908, 12 of the country’s 76 electorates voted in favour of this. This included the Mataura District where Gore was located, with sixty percent of the residents voting to make sale of alcohol illegal. This worked in the McRae family’s favour, boosting their sales of moonshine even more.

The McRae family mostly managed to evade police by keeping their distilling equipment hidden in secret locations around the creeks and gullies of the Hokonui Hills. In 1928, Hugh Sherwood Cordery was appointed as the new Southland Customs Inspector. He remained in this role for seven years and made prosecuting illegal distillers his personal mission. Although he had several McRaes arrested and tried on multiple occasions, he usually had trouble securing prosecutions, as Southland juries were very reluctant to convict them. Gerald Enwright was another infamous whisky bootlegger who had a large distribution network across Southland. He was finally arrested by police in 1950 and his distilling equipment seized. However, instead of destroying the equipment, the pieces were sold at an Invercargill auction house. Enwright’s friends were the successful bidders and he was able to continue manufacturing and selling moonshine until he was apprehended again in 1957.

Southland’s bootlegging history is on display at the Hokonui Moonshine Museum in Gore, which details more than thirty prosecutions relating to illegal whisky distilling in the region. The museum sells bottles of ‘Old Hokonui Whisky’ manufactured by the Southern Distilling Company, a legal and licensed spirit manufacturer. Their whisky is made using the McRae’s original family recipe, hand-written in a letter in 1895 that is now on display in the museum. The whisky’s label incorporates a skull and crossbones, originally used on Gerald Enwright’s bottles of moonshine. Below the pirate emblem the label reads “passed all tests except the police,” a reference to the 1925 Dunedin Exhibition where Murdoch McRae’s whisky received raved reviews. There is also a Hokonui Moonshiners Festival held every second year in Gore, with food stalls, live music and of course, Old Hokonui Whisky.