Fingerprinting and the “GOTCHA” Badges 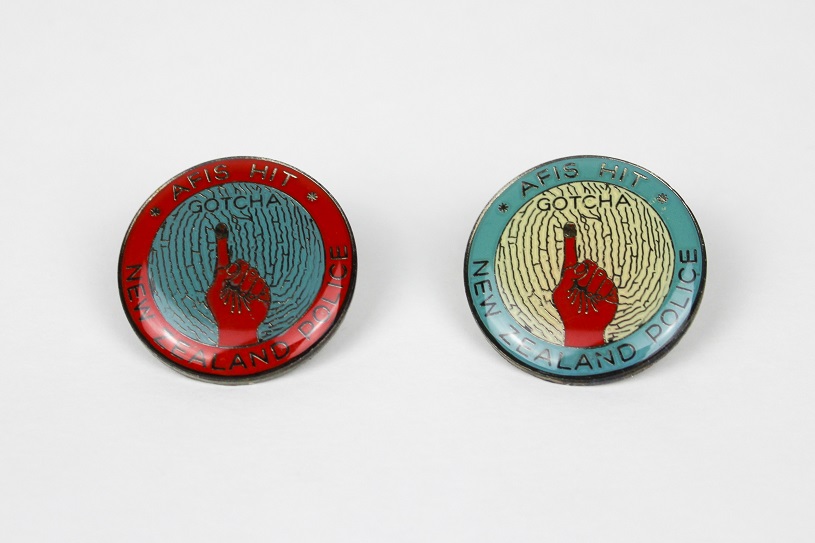 The development of fingerprinting in New Zealand can be credited to Walter Dinnie, former Chief Inspector of the London Metropolitan Police, who became New Zealand Police Commissioner in 1903. At his insistence, fingerprints of every arrested criminal were taken and forwarded to the Fingerprint Bureau in Wellington. By 30 June 1903, the Bureau had already received 498 sets.

New Zealand was the first country to convict someone based on fingerprint evidence alone. In May 1905, John Clancy was convicted of breaking and entering in Wellington after he left a single finger impression on a broken piece of window glass. His fingerprints had been taken at Auckland gaol a few months earlier. The first Commonwealth citizen executed based on a conviction secured by fingerprint evidence also took place in New Zealand. Dennis Gunn was sentenced to death for murdering Augustus Edward Braithwaite while robbing the Ponsonby Post Office on 13 March, 1920. Gunn’s fingerprints were already on file from an earlier conviction for military desertion and matched prints that police found on the murder weapon and stolen cash boxes.

New technological advancements in the 1980s led to the invention of Automated Fingerprint Identification Systems (AFIS). Since then, these have been used by police and law enforcement agencies all around the world to identify criminals. AFIS is a highly effective tool that significantly increases the chances of successfully identifying a suspect. It was introduced in New Zealand on 23 January 1991 and now holds the National Fingerprint Database, maintained by the National Fingerprint Section in Wellington. To celebrate the second anniversary of AFIS, limited edition “GOTCHA” badges were issued to police officers who met certain criteria in achieving successful AFIS computer hits from crime scene fingerprint traces. The enamel pins designed by Senior Fingerprint Officer Julian Atkins contained an image of a red hand and a fingerprint to symbolise being caught red-handed.

Fingerprint officers examine crime scenes and physical evidence for latent fingerprints, palm prints and footprints. Latent prints are invisible to the naked eye and are recovered using chemical, physical or lighting techniques. Officers will then run a search that compares the unknown latent fingerprints with known offender prints stored in the AFIS. Fingerprint officers manually analyse the tiny details of a fingerprint to identify which features to focus the AFIS search on. There are up to 300 possible points of comparison on a single fingerprint. If the prints are partially or mostly incomplete, they may be difficult to match using AFIS. In any case, a search will usually bring up several potential matches. Fingerprint experts are then required to do further analysis to determine whether there is a match. Before a positive identification is officially made it will be checked by other experts, especially if the print is being used as evidence in court. If there is no hit but the prints are known to be related to a crime, they are registered on the database in case there is a match later on.

In the United States, the AFIS used by the FBI is the world’s largest collection of criminal history, containing the fingerprints of 143 million people. AFIS are now transforming into ABIS (Automated Biometric Identification Systems) as new biometric technologies such as iris and facial recognition are continually developed.