Home > About us > Structure > Police districts

New Zealand Police is divided into 12 districts, 9 in the North Island and 3 in the South. Each district is divided into areas and has a central station from which subsidiary and suburban stations are managed. 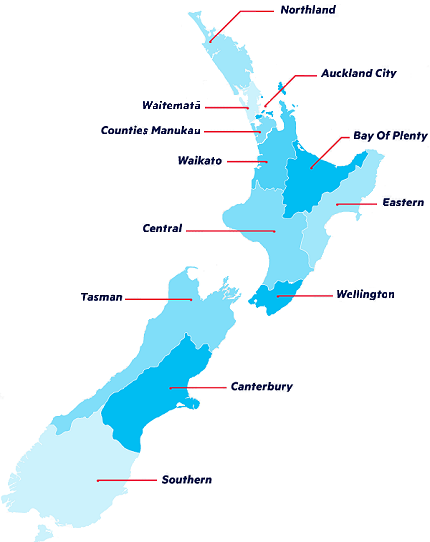 Click the map to learn about each each district.

Auckland City stretches between Herne Bay and Freeman's Bay to the north, St Heliers to the East, Onehunga in the south and Avondale in the west, including Waiheke and Great Barrier Islands … More

Northland is divided into two areas that cover 12,844 square km from Kaiwaka to Cape Reinga. It has 21 police stations, 14 of which are one to two person stations … More

Waitematā borders Auckland City District to the south and Northland District to the north. It covers the area north of Auckland from New Lynn, North Shore and Devonport up to Mangawhai … More

Waikato covers the area between Te Kauwhata in the north, Benneydale in the south, Raglan to the west and the Coromandel Peninsula to the east … More

Bay of Plenty covers the area from Katikati in the north, east to the tip of the East Cape and south past Turangi in the central North Island … More

Central Police District covers an area that stretches from the North Taranaki Bight, across to Ruapehu, south to Otaki in the west and across to the Tararua ranges in the east … More

Southern covers a quarter of the country’s landmass, from Stewart Island in the south, north to the Waitaki River and west to Haast … More

Tasman covers 70,000 km2 of territory, encompassing the northern and most of the western portion of the South Island … More

Wellington covers the southern part of the North Island. Its northern border stretches from Peka Peka on the Kapiti Coast, across the Hutt Valley and over the Tararua Ranges to the Wairarapa … More