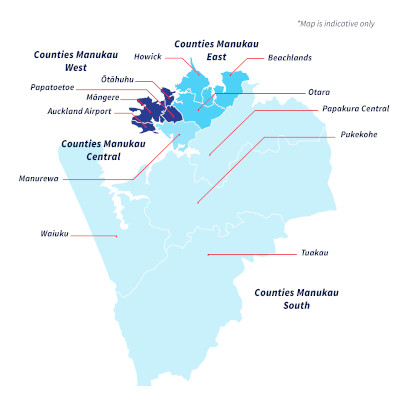 The Counties Manukau District population is made up of many diverse ethnicities.

For general inquiries or to report a non urgent crime:
Call the Counties Manukau Police Station on 09 261 1300

Neighbourhood Policing Teams aim to reduce crime, prevent victimisation, improve perceptions of safety and increase trust and confidence in Police. Their efforts are concentrated in their identified priority neighbourhoods.

Aspects of the population in the Counties Manukau Police District contribute to some special policing needs.

The Counties Manukau District Major Crime Team (MCT) is a dedicated team which can provide a ready response either in support of an existing operation or by launching a team into a fresh operation. The MCT can mobilise at short notice. MCT does not have the capacity to lead or support every district-wide homicide or operation involving serial offending, so is deployed based upon:

MCT involvement can result in:

The Child Exploitation Team enables Police to be more proactive in preventing offending. The team has implemented prevention initiatives in the traditionally reactive field of child sexual abuse investigation. These have protected vulnerable children from becoming victims of child abuse and held child sex offenders to account for their offending. The team has improved our response and investigation into child sex offending in the following ways:

The building is located at 627 Great South Road, Manukau and is specifically designed to be victim-focussed and enables the three statutory agencies to work together to provide an excellent, co-ordinated service to the victims of abuse. It also provides a vital link back to the numerous community groups who are committed to providing ongoing support to the victims and their families.

The Counties Manukau Multi-agency Centre investigates all serious abuse of children, sexual assault against adults and assesses and co-ordinates the need for intervention with the families of these victims to assist with the empowerment of the family unit throughout the investigative process. The Centre also provides intelligence information and co-ordinates the District response to family violence.