The Waikato Police District covers the area between Te Kauwhata in the north, Benneydale in the south, Raglan to the west and the Coromandel Peninsula to the east. 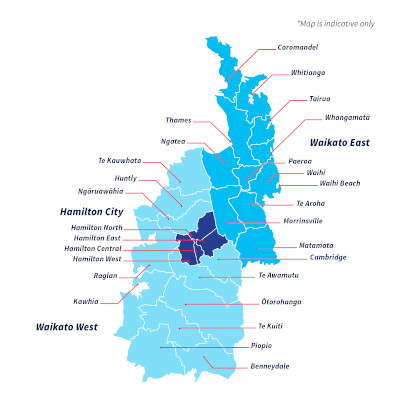 Whether it's policing Hamilton's city streets or keeping diverse rural communities between the southern King Country and the tip of the Coromandel safe, Police in Waikato are committed to taking the lead in making our District a safer and more enjoyable place to live.

We maintain close links with our communities as we work towards our goals of community reassurance, policing with confidence and organisational development.

These teams aim to reduce crime, prevent victimisation, improve perceptions of safety and increase trust and confidence in Police. Their efforts are concentrated in their identified priority neighbourhoods.

The Waikato Police District is recognised for its innovative approach involving partnerships to achieve the community's goal of reducing re-offending.

Examples of this include the design and implementation of the Nga Tai Tamahine o Kirikiriroa course in Hamilton. This identifies what it is that triggers girls' anger, by using weekends away that include activities such as caving and rope climbing, and involves a partnership between the Taiohi Toa Trust and the Ministry of Social Development.

The nationally implemented anti-truancy programme 'Rock-On' was designed and implemented in Hamilton and aims to keep young people off the streets and in schools. In the King Country a partnership between Police, Ministry of Health, Alcohol Advisory Council and rugby clubs targeting drink driving has been recognised as a national leader. It is being adopted in a number of other provincial areas.