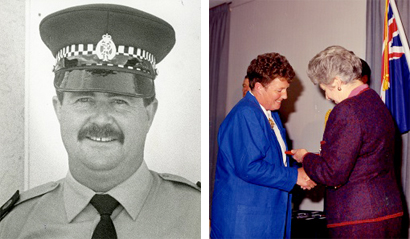 On 27 May 1990, an armed robbery occurred at the Poolburn Hotel near Ranfurly. The offender woke the hotel owners from their sleep, ripped out most of the hotel’s telephones to prevent Police being called and escaped with $380. The hotel owners contacted Police using a phone in their bedroom the offender had missed. Constable Umbers was at home when he was called out just after midnight.

Constable Umbers drove out of Ranfurly. At 16 minutes past midnight he advised Dunedin Control that he was stopping a Toyota Hilux on the Wedderburn straight, 5km outside Ranfurly. The vehicle was believed to have been used in the robbery. He stated to Control: “Ranfurly to Ops, a 3T, registration OL5702, white Toyota Hilux flat deck.”

Silence followed. When nothing further was heard from Constable Umbers, Police and ambulance crews were dispatched to the area. They found Constable Umbers dead beside his vehicle. The red and blue lights on his Police car were still flashing.

It was clear a violent struggle had taken place and Constable Umbers’ .38 revolver and PR24 baton had been taken from him during the fight. Umbers’ injuries were so severe it was first thought he’d been shot. However, it was later established he had suffered extensive head injuries from blows inflicted by a blunt object. Constable Umbers had been beaten to death with his PR24 baton. The baton had broken with the force of the blows.

The hunt for the offender began. Police investigations were complicated by freezing weather, with several officers needing to borrow coats from the nearby Ranfurly Fire Station. Eventually the Toyota Hilux was spotted heading toward Central Otago over the Lindis Pass. Police gave chase and the offender stopped and exited the car with a rifle in his hands. He was arrested by Police who discovered several firearms in the car, including Peter Umbers’ Police-issue revolver.

The 19-year-old offender was eventually sentenced to life imprisonment for Constable Umbers’ murder.

Police and the local community were shocked and devastated by the popular Police Officer’s murder. His funeral was held in the Ranfurly Sports Stadium as no church was large enough to accommodate the number of mourners wishing to attend.

Constable Peter Umbers was survived by his wife, Sue (pictured above receiving her husband’s medal), and the couple’s two daughters, then aged eight and 10.

He was posthumously awarded the George Medal for his courageous actions.