Operation Buckingham: when a colleague’s life hangs in the balance, Papatoetoe, 22 December 2009 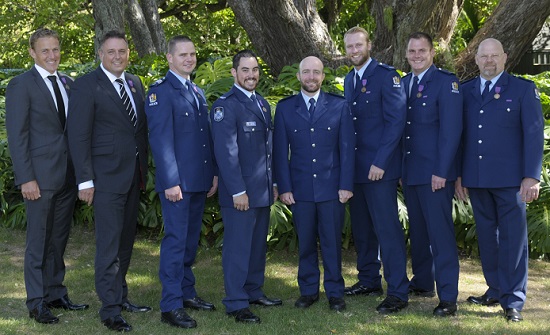 Shortly before 4am on 22 December 2009, Police Constable Jeremy Snow was shot four times, suffering life-threatening injuries at a residence in Papatoetoe. He collapsed in the yard of the property which was at the end of a long, shared driveway.

The team made a rapid approach in two vehicles, positioning the vehicles for cover. The rescue team advanced up the driveway on foot and found the wounded officer. He was seriously injured, including a fractured leg and heavy bleeding from his femoral artery, requiring immediate evacuation.

Constable Collins, Detective Constable Luxford, Constable Pham and Constable Warne carried him while Detective Constable Cater, Constable Mulder and Sergeant Turnbull stayed on the property to cover their withdrawal. The wounded officer was carried to one of the patrol cars used in the approach, a distance of 103 metres, and then driven at speed to an ambulance waiting on the street.

The team then blocked the driveway with a patrol car and took up observation positions as the gunman had not yet been located. The officers held these positions until relieved by a Crime Squad.

Throughout this operation, the location and number of offenders were unknown. The officers could have waited for the Armed Offenders Squad to arrive, but instead chose to put themselves at risk to rescue their colleague as soon as possible.