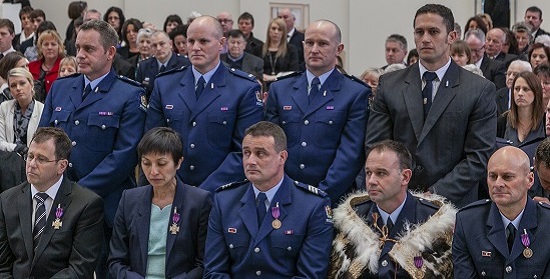 Sergeant Michael Brooklands was on duty in central Christchurch when the 6.3 magnitude earthquake struck on 22 February, 2011. He was one of the first police officers to arrive at the collapsed Canterbury Television building and took immediate command at the site. He contacted Police Communications and gave them a situation report, requesting Fire Service and other assistance.

A fire had ignited in the lower levels of the building, complicating rescue efforts. Sergeant Brooklands worked with Constables Cowles, Kneebone and Lee on the roof of the building to conduct several rescues amongst the rubble of the building’s lift tower. Their lives were at particular risk during the first hour when they were working under the precarious lift tower which was disintegrating with each aftershock.

They were initially able to free a woman and two children. The officers then searched for audible tapping or voices and managed to pinpoint the locations of at least eight survivors. Where possible, the officers dug down to the survivors and using stretchers sourced from the nearby Inland Revenue building, carried them to waiting medical personnel. They heard a woman calling for help in the burning area of the building and made several attempts to reach her with only wet clothing wrapped around their heads to protect against the heat and smoke. This took place before the Fire Service had arrived on the scene. Due to a brief change in wind direction they were able to climb down inside the building, reach the woman and pull her free. As well as climbing into the building and assisting with rescuing survivors, Sergeant Brooklands assumed control and deployment of staff at the site. The police team succeeded in rescuing at least six people from the CTV site. Sergeant Brookland communicated clearly with the Police Communications Centre, identifying the site needs. He established a grid pattern for the building search and assigned staff to specific areas, as well as initiating the establishment of a triage and mortuary facility. Sergeant Brooklands remained the police controller at the site until 3am the following morning.

Senior Constable Danny Johanson was deployed with a police unit carrying advanced medical kits and specialist equipment into the inner-city. The team used concrete cutting equipment at several sites and were at the forefront of several rescues at both the Pyne Gould Corporation (PGC) and Canterbury Television buildings. 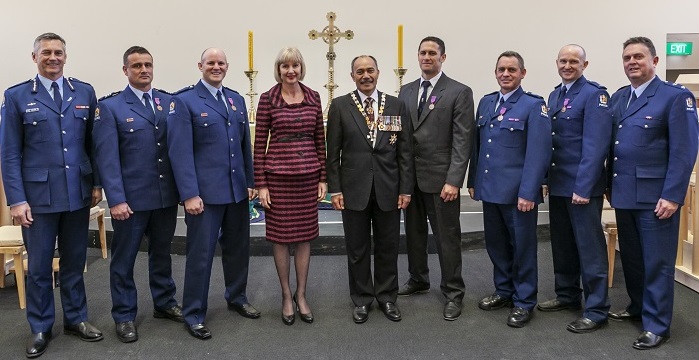