A crash, an explosion and a family trapped in a burning van, Taupō, 24 April 2009 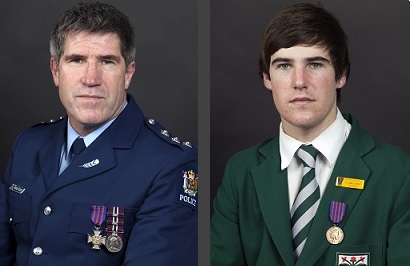 At 3.55pm on 24 April 2009, Inspector Michael O’Leary was off duty and driving with his family along State Highway One some 17km north of Taupō. The vehicle in front of him, a Toyota van, crashed head-on with a black sedan coming the opposite way. The van, which contained six people, flipped into the air, landed on its rear, and rolled four times before going off the road, down a grass embankment and bursting into flames.

Inspector O’Leary was the first person to arrive at the scene. Instructing his son, Conor, to wave down any approaching traffic, he went first to the black sedan and determined the male driver showed no signs of life. Going to the other side, he realised the female passenger was semi-conscious and may have sustained a broken leg and other injuries. He told her help was on the way, but decided not to try and remove her from the car.

Hearing an explosion, he looked over to the other side of the road and saw the van in flames. Inspector O’Leary crossed the road but the flames and the angle of the bank prevented him from approaching the van from that side. A passing motorist with a small fire extinguisher, Peter Booth, stopped to offer support. After a few words to Mr Booth, Inspector O’Leary ran down the bank and crossed a wire fence to get to the other side of the vehicle. From there he could see two children hanging out of a window to about chest level. As the flames above him were getting stronger, he pulled a two-year-old boy from the van and ran about 15 metres away from the vehicle where the child was taken by Inspector O’Leary’s daughter back to their car. He then went back to the van to rescue the second child and was joined by his son Conor.

By now the van was full of dense black smoke, the flames were becoming fiercer and there were small explosions from inside the vehicle. Inspector O’Leary, Conor O’Leary and Mr Booth attempted to pull the second boy free but he was held inside by what may have been his seat belt and the flames beat them back. Determined not to let the child die, Inspector O’Leary asked if anyone had a knife. Fortunately Mr Booth had brought a pocket knife with him when he came to assist. Inspector O’Leary took it and, leaning inside the vehicle, was able to cut away whatever was restraining the child. The three of them were then able to pull the boy, whose trousers were on fire, clear of the vehicle. Inspector O’Leary ripped the burning clothes from the child and took him to a place of safety. By now the van was a ball of fire and further rescues were impossible.

Although he had sustained burns himself, Inspector O’Leary continued to manage the crash scene, especially the care of the injured, until Police and other emergency services arrived. He was then taken to hospital for treatment. Despite the horrific scene confronting him, Inspector O’Leary displayed coolness, professionalism and exceptional bravery in the manner in which he first controlled the crash scene, and then went about attempting to rescue those trapped inside the burning van. At any time during the rescue attempts the van’s fuel tank could have exploded, killing or seriously injuring him and those with him.