In Hamilton on 25 August 2014, a van was stolen by an offender with a history of violent crime and methamphetamine use. Constable Blair Spalding responded in his Police dog van and pursued the van into a traffic-heavy road. He attempted to pass to warn traffic ahead and create a buffer between civilian traffic and the van. The van swerved into oncoming traffic to prevent him from overtaking. Given his knowledge of the offender’s propensity to carry firearms, Constable Spalding deemed it an unacceptable risk to allow the van into the central city and pulled alongside it, at which point it swerved and came into contact with Spalding’s vehicle.

Spalding pushed the van off the road and across the footpath before it broke free and continued along the street. It eventually entered the carpark of a supermarket via the exit lane, colliding with a vehicle. The offender left the van carrying a loaded sawn-off shotgun.

Constable Spalding drove into the carpark and swung his vehicle around to cut the offender off. The offender, now on foot, ran into the side of the dog van before continuing and attempting to take another vehicle at gunpoint from an elderly woman at the supermarket’s petrol pumps. Constable Turner arrived on the scene and observed the offender trying to hijack the elderly woman. Fearing for her safety, he rushed over and grabbed the offender and dragged him away from her car. Knowing the offender had the shotgun in his right hand, he swung the offender around by his left arm to keep him moving and off balance. 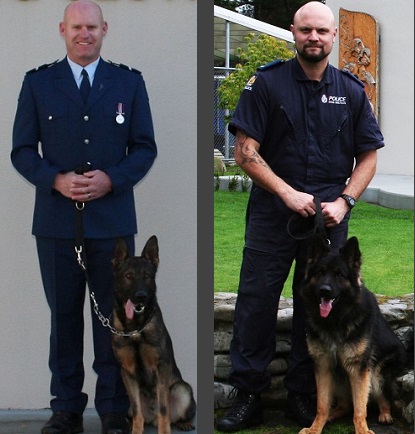