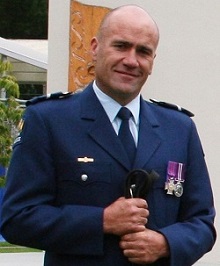 At 3am on 23 June 2007, a stolen vehicle was observed coming into Mount Maunganui. The vehicle was being driven by two 14-year-old youths who had escaped from a Child, Youth and Family residential bush programme in the Upper Ruatoki Valley. They had burgled two rural homes and obtained firearms, ammunition and the car. They had driven to Whakatane and committed further offences. Constable James Muir and his dog Neo, were called out to join the pursuit.

While the vehicle was being pursued, the passenger climbed into the back seat and armed himself with a .303 rifle and began to fire at Police, including Constable Muir’s car. About this time the offenders’ car began to slow, as its tyres had been spiked by Police earlier in the pursuit. The offending vehicle was forced to stop. Seeing his colleague was in a dangerous situation, Constable Muir came to his aid by parking immediately behind the offenders’ vehicle.

By this time, another officer was out of his car and attempted to apprehend the driver of the offenders’ car. The youth in the back of the car pointed the rifle at the Constable who, fearing he would be shot, took cover behind a nearby wall. The two constables then verbally challenged the two youths to surrender. The youth with the rifle then pointed it first at the other officer and then at Constable Muir. At one stage, Constable Muir saw the youth work the bolt and heard a click as the trigger was pulled. Fortunately the rifle chamber was empty. The driver of the offenders’ car then got out of the vehicle and surrendered. The youth with the rifle also got out of the vehicle and moved toward the other officer’s car, which still had the engine running. Before he could reach it, Constable Muir released his dog Neo, who apprehended him. At the same time, the other youth attempted to escape and was also apprehended.

Constable Muir acted calmly and professionally in a dangerous and rapidly changing situation over which he had no control and in which he had no alternative but to help his colleague. Throughout the incident there was the risk of being shot by an offender who showed he was prepared to use a firearm to enable his escape.