On 5 June 2005, at 9:20 am, a man drove into the St Luke’s Mall carpark after being pursued by Police for driving dangerously through inner-city Auckland. 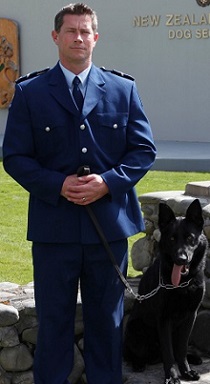 On 5 June 2005, at 9.20am, a man drove into the St Luke’s Mall carpark after being pursued by Police for driving dangerously through inner-city Auckland. Armed with a cut-down AK47 MSSA rifle, the offender tried unsuccessfully to hijack a car occupied by a mother and her six-year-old daughter. The offender then tried to hijack a second car, but was distracted by the arrival of a Police patrol car driven by Constables Pennington and Gibson.

The offender approached the Police car and pointed the rifle at Constable Pennington. He pulled the trigger, but the gun failed to fire. Undeterred, the offender continued approaching the car while maintaining his aim on Constable Pennington, who was radioing Police control. Constable Gibson dived out of the car while the offender was still trying to fire his weapon - he successfully chambered a round and fired into the carpark ceiling. Not knowing which direction the shot came from, Constable Pennington also dived out of the car. Realising both officers were now lying prone on the opposite side of the vehicle, the offender fired several shots through the rear passenger door of the Police car in an attempt to kill them. One of the shots passed close to Constable Gibson’s head.

The offender then ran off and attempted to hijack a further two vehicles at the carpark entrance. During this time, both constables moved to a position where they could observe the offender. Believing several members of the public were in grave danger, Constable Pennington stepped out from behind cover to attract his attention. Realising the officers were still alive, the offender ran back into the carpark firing at them.

Both Constables ran up a ramp and, once they believed they were clear of the offender, warned members of the public who were in the vicinity to get clear while they called for backup. During this time the offender finally managed to hijack a vehicle containing a man and his elderly parents and drove off with them still in the car. During the ensuing pursuit the offender fired on Police a further three times and was eventually apprehended by the Armed Offenders Squad. 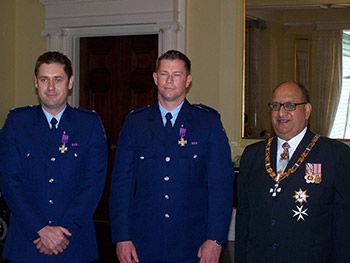 Throughout the incident both Constables were unarmed, displaying great bravery in confronting an armed offender intent on killing them. Working as a team, they made sure members of the public were warned of the danger and managed to prevent at least two attempts by the offender to hijack vehicles in the carpark. They also kept Police controllers informed throughout the incident, which enabled the subsequent arrest of the offender.