When the gunman set out from Dunedin to drive to Christchurch on the morning of 15 March, he had six firearms in his vehicle (two military style semi-automatic rifles, two shotguns, a lever action rifle, and a bolt action rifle) and numerous rounds of ammunition contained in various magazines. He also had two sets of ballistic armour (a bullet proof vest and a military style tactical vest) and four incendiary devices.

Armed with the semi-automatic shot guns and rifles, the gunman opened fire on worshippers inside each mosque. He also indiscriminately shot at people fleeing the mosques and took aim at people and vehicles on the streets as he drove erratically between the two mosques. At 1.50pm the same afternoon, he was apprehended by a two-man Police patrol, in Brougham Street, Christchurch.

When apprehended, the gunman was dressed in full camouflage gear including a helmet with a video camera attached that had recorded his activities from start to apprehension. Inside his vehicle Police located an arsenal of weapons including the other firearms (not already discarded by the gunman at the two major crime scenes), a bayonet-type knife attached to his vest and explosive material considered to be a potential bomb. The explosive material (described as incendiary devices), comprised four 10-litre petrol containers with a detonation device duct-taped to their side.

The 10 minutes from 1.40pm to 1.50pm, was described as total mayhem with 51 people shot dead and a further 89 wounded, many seriously. The wounded included 40 people with bullet wounds and another 49 who sustained other injuries.

Many civilians showed courage and bravery that day. Dr Naeem Rashid was at the Masjid Al Noor when the gunman arrived and began shooting at the 113 people gathered there for Friday prayers. Dr Rashid ran directly at the gunman, grabbing him and knocking him to the ground. Dr Rashid was shot dead. His actions allowed at least seven other people to escape.

The selfless and deliberate act of Ziyaad Shah in protecting a ‘brother’ Shah Jahan, with his own body, without regard for his own life and safety while the gunman was shooting and killing people at will, demonstrated extreme bravery during a period of imminent threat and danger to the lives of both men. Mr Shah was wounded while preventing Mr Jahan from being injured or killed by the gunman.

Abdul Aziz Wahabzadah challenged the gunman and was shot at from very close range. He threw items including a discarded firearm at the gunman’s vehicle before chasing the departing vehicle down Linwood Avenue.

Carl Pomare was travelling along Deans Avenue with Mark Miller and witnessed people being shot outside the mosque and stopped to assist. The two men entered the live firing zone to drag victims to safety with gunfire overhead and in their general direction.

Liam Beale was travelling north along Deans Avenue when he saw a male stumble and fall and heard rapid gunfire all around. Liam dropped to the ground and began assisting victims.

Wayne Maley was travelling with Michael Robinson on Deans Avenue near the mosque when they heard popping sounds. They saw the gunman firing shots outside the mosque. They parked their vehicle across the northbound lane to stop vehicles heading directly into the live danger zone and then went to assist the victims.

Lance Bradford was driving near the mosque on Deans Avenue when he saw an elderly lady lying on the ground in distress. He then observed eight to 10 people scattered on the ground. Realising something bad was occurring, he stopped his vehicle and walked toward the mosque to help. As he did so, he could hear gunshots and people screaming. He stopped people who were unaware of what was happening, from entering the danger zone. He then assisted victims who were being attended to by other members of the public.

Zulfirman Syah selflessly and deliberately protected his son Averroes Omar Syah with his own body, without regard for his own life and safety, demonstrating extreme bravery during the imminent threat and danger to both their lives. Both were wounded.

Senior Constables Scott Carmody and Jim Manning intercepted the gunman’s vehicle, resulting in his arrest. At the time, and up until they apprehended the gunman, the two constables believed they were dealing with multiple active shooters. They identified the offender’s vehicle amongst heavy traffic on Brougham Street. Carmody and Manning maneuvered their patrol car to disable it and hopefully the driver, pushing the car up onto the curb in such a way that contact did not damage the patrol car or deploy the airbags, both of which would have prevented them from exiting the car quickly. Within seconds they had the gunman out of his car. Manning searched the vehicle for more offenders and discovered a large incendiary device in the rear, while Carmody kept his weapon trained on the gunman. The offender was reaching into his ballistic vest and fearing he was trying to detonate the bomb, Carmody rendered him unconscious with his rifle butt and was able to handcuff him. The two senior constables knowingly risked their lives by going into a highly volatile and dangerous situation involving an active gunman. They apprehended the gunman, preventing further danger to members of the public.

Title: 51
By: Artists Muhammad Waqas and Sameera Waqas
Acrylic and Posca metallic marker on canvas
Collection of the artist 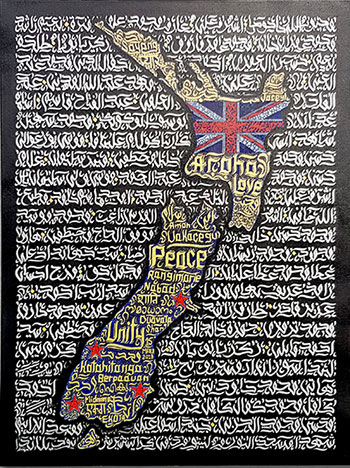 Special Painting to remember the 51 Martyrs or
Christchurch Mosque attacks

“51” is a painting to remember the 51 Martyrs of the Christchurch Mosque attacks.

Aroha, Rangimarie and Kotahitanga (Love, Peace & Unity) are key elements for successful co-existence in any diverse society. This artwork was created to mark the 2nd anniversary of the Christchurch mosques attacks and remember the 51 Martyrs.

On the black background the names of the 51 Martyrs are written in Arabic Calligraphy (Al-Sunbali script). The New Zealand map in the colours of the flag, blue, white, and red, floats above. Ten different languages: English, Māori, Arabic, Urdu, Hindi, Fijian, Somali, Malay, Malayalam and Dari have been used to write love, peace and unity on the map. These languages also represent the 51 Martyrs’ country of origin.