Home > About us > History and Museum > Museum > Exhibitions > The place of many brave deeds > 2009 - Operation Stingray - NZBS, NZBD and NZBM

Operation Stingray, the murder of Senior Constable Len Snee: the Napier Siege, 7 - 8 May 2009 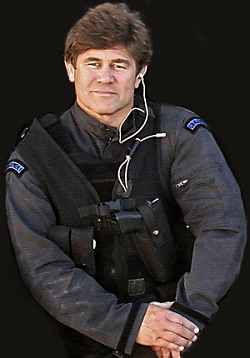 “I remember sort of getting to my feet and falling over and stumbling and crawling… but we got up the hill. I can remember turning around and looking back down the road and…seeing Len Holmwood in the middle of the road grappling with (the gunman).”
Senior Constable Grant Diver

“I knew he was gone before the AOS officers got to me…because I heard his last breath. That part was, out of the whole day, the hardest part from me. Watching someone fade.”
Len Holmwood on Senior Constable Len Snee

The initial shooting was followed by a siege lasting more than 40 hours. Napier Police and the Armed Offenders Squad (AOS) arrived quickly to the scene. With assistance from members of the public; Donald Fraser, Christine Jackman and advanced paramedic Stephen Smith, Detective Sergeant Nicholas Clere, Detective Paul Buckley and Senior Constable Bradley Clark rescued the injured Police officers and Len Holmwood. Repeated attempts were made to retrieve the body of Senior Constable Snee, which lay on the gunman’s driveway, but his constant gunfire made the task difficult and dangerous.

“I…put a round of tear gas into his house and he obviously worked out what direction the gas had come from and he just opened up. My mate and I just had to put our heads down and hope. There (were) bullets and concrete chips flying and trees being shredded. I think he was pretty determined to take someone else out. When you do the type of work that we do you learn to manage your fear. But I’d be lying if I said I wasn’t fearful. No, I thought that was my last day on earth.”
Senior Constable Dennis Hurworth

Detective Sergeant Timothy Smith was one of the first officers to arrive at the scene of the fatal shooting of Senior Constable Len Snee and the wounding of Mr Len Holmwood, and Senior Constables Grant Diver and Bruce Miller. 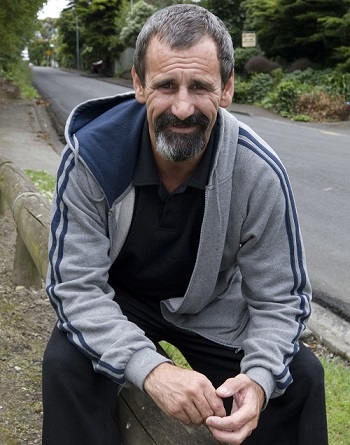 Though he was unarmed, Detective Sergeant Smith advanced into the immediate scene of the incident with several colleagues to a position across the road and slightly uphill from the gunman’s house, and where two civilians were sheltering behind their cars. From this position, Senior Constable Miller could be seen lying wounded in a driveway next to the gunman’s house and partially sheltered by a low brick wall. Having ascertained that one of the civilian cars had the keys in the ignition and was able to be driven, Detective Sergeant Smith ordered the two civilians to get clear of the area. Realising it would not be possible to extract Senior Constable Miller without some means of protecting him, Detective Sergeant Smith decided to make a rescue attempt using the car. He climbed in, cleared the back seat of a guitar case and then heard a volley of shots, which made him duck for cover on the front seats. As he did so, he saw two Police officers approach Senior Constable Miller on the other side of the road and cover his body with theirs to protect him from further injury. All three were afforded some protection by the low brick wall.

Detective Sergeant Smith played a prominent role in the recovery of two seriously wounded Police officers. Though unarmed, he displayed coolness, initiative and exceptional bravery in effecting the rescue of Senior Constable Miller under fire from the gunman. He put his life in danger again only a short time later when he joined the team that successfully rescued Senior Constable Diver. Without his outstanding contribution, the outcome for the wounded officers might have been different.

Senior Sergeant Anthony Miller, Sergeant Heath Jones and Constable Kevin Rooney were some of the first officers to arrive at the scene.

Having assisted in the evacuation of Senior Constable Miller, Sergeant Jones and others withdrew from their position and established a cordon point at the northern junction of Chaucer Road South and Guys Hill Road. It was here they were advised that the wounded Senior Constable Diver was located at 45 Chaucer Road South, two doors away from the gunman’s house at number 41. A plan was formulated in which an evacuation party consisting of Detective Sergeant Nicholas Clere, Detective Sergeant Smith and Mr Stephen Smith, an Advanced Paramedic from St John Ambulance, would take a stretcher to where Senior Constable Diver was hiding and attempt to remove him from the scene. The plan included provision for a ‘hot extraction’ using an ambulance, should the group be fired upon at any stage. Sergeant Jones gave his ballistic vest to the paramedic and remained at the cordon point while the evacuation party set out.  Having successfully recovered Senior Constable Diver from his position at number 45, the evacuation party began its return journey to the cordon point; however, they encountered difficulty due to the steep gradient of the hill. Seeing this, Sergeant Jones, without his ballistic vest, ran down the hill, took over from one of the other Police officers at the front of the stretcher and assisted the group to safety.

Sergeant Jones played an important role in the events that took place on the morning of 7 May. He displayed exceptional bravery and put his own life in danger during the successful evacuation of Senior Constable Miller from his exposed position near the gunman’s house, while under fire, by providing cover while his colleagues protected Senior Constable Miller and then placed the wounded officer in the car. He performed a second act of bravery by going to the assistance of the group evacuating Senior Constable Diver, even though he had earlier given his body armour to the paramedic in the evacuation team.

As they moved down Chaucer Road they came across Senior Constable Miller who had been shot and was lying in the driveway at number 47 and was being attended to by others. Ascertaining he was stable, they found Senior Constable Len Snee, also a serving member of the AOS, in front of 41 Chaucer Road (the gunman’s house).  Checking Snee’s condition, they found he was deceased. Leonard Holmwood, a civilian who had been shot, was also located nearby. By now Symonds and his team were fully aware the offender possessed high calibre semi-automatic firearms, was able to accurately discharge them, was volatile, and had shot three Police officers and a civilian. His precise location unknown, they knew they were in a very dangerous situation.

Even with this knowledge, Burne and the other two AOS officers pressed on, fully exposed to gunfire, looking for Senior Constable Diver. They thought Diver was possibly in the section at the rear of the gunman’s house. Senior Constable Symonds called out to Diver, the calls alerting the gunman to their position. Without any warning, the gunman fired a volley of at least 13 shots at them. The officers took cover behind a wooden fence close to the gunman’s house. The shots went through the fence above their heads.

They received advice that Diver was in 45 Chaucer Road. Burne was subsequently deployed into the old Napier Cemetery, across the road from 41 Chaucer Road, and was tasked with providing observations of the gunman’s address.

Constable Burne and Senior Constable Hurworth showed outstanding bravery. They made the decision to enter the immediate area outside 41 Chaucer Road at a very early stage in the incident, knowing at least one Police officer had been shot and that shots were continuing to be fired by the offender, whose exact location was unknown. They also remained there after finding a colleague shot dead and a civilian wounded. They operated in challenging terrain on a search and rescue mission for those shot by the offender knowing the gunman was volatile. Despite being equipped with ballistic armour, they knew their lives were in significant danger, as the gunman was using high calibre semi-automatic firearms at close range.

Ultimately, attempts to negotiate with the gunman were unsuccessful. The following day, Police entered his home and found him dead from a self-inflicted gunshot.