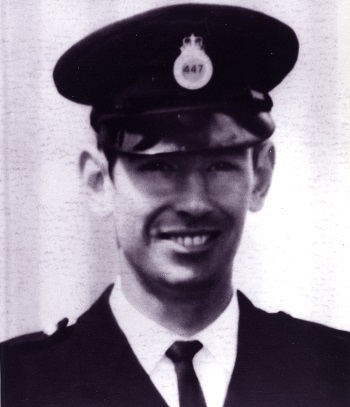 Ministry of Transport Traffic Officer, Robin Dudding was posted on duty at Moose Lodge, Lake Rotoiti, as part of the security arrangements for the visit of the Prime Minister of Singapore. At the same time, an 18-year-old was holding up a nearby store, using a double-barrelled shotgun. The offender then converted a car, took off at high speed and crashed into a bank. A passing truck driver witnessed the crash and stopped to help. The offender pointed the shotgun at him and ordered him to drive to Rotorua. When the truck rounded the bend by Moose Lodge, the offender saw Robin’s patrol car and Constable Tuti Katene who was standing beside it. The offender fired the shotgun, hitting the Constable in the face. As he ran, he was shot again in the right hand.

Coming to the Constable’s aid, Robin Dudding was ordered by the offender to get in his patrol car and drive him to Rotorua Police Station. Fearing the consequences of going to the Police Station with a man who was clearly agitated and deranged, Robin decided to play for time and drove away from Rotorua.

Near Hamurana, armed police who had been following spotted the patrol car at the roadside. The offender was standing beside it with the shotgun in his hand. In spite of three warning shots fired by Police, he moved toward them firing. Police fired a fourth shot that felled him but he then pulled a knife from his belt. Police disarmed him and took him into custody. Robin Dudding was found in his patrol car. He had been shot in the neck and killed.

The offender was charged with the murder of Robin Dudding and the attempted murder of Tuti Katene. He was found not guilty on both charges because he was insane. He committed suicide in prison.

For his bravery in preventing the gunman from carrying out his murderous intent, Traffic Officer Robin Dudding was posthumously awarded the George Medal. He left behind a grieving wife and two teenaged daughters. More than a thousand people gathered at his funeral. His enthusiasm for vintage cars and traffic safety was acknowledged at the service. A death notice from local truck drivers described Dudding as: “A guy who had the respect of us all, we’ll probably meet again if there’s a weigh-bridge on that highway to heaven.”