A man intent on self-harm lashes out violently, Papatoetoe, 27 July 2014 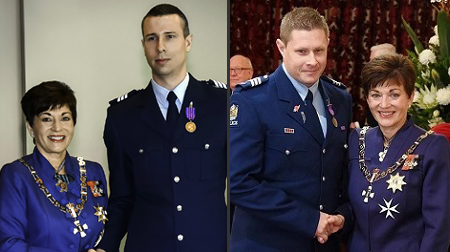 On 27 July 2014, Sergeant Ryan Lilleby, Constable Chris McDowell and another officer attended a family harm callout in the Auckland suburb of Papatoetoe.

A woman met them outside the property saying her husband was inside armed with a knife and threatening to self-harm, having earlier threatened to kill her with the knife.

Sergeant Lilleby observed the man through an open window and told him to drop the knives. The man responded by beginning to cut his wrist with a large kitchen knife. The officers entered the house, finding the man sitting on a couch with two knives.

Lilleby and McDowell aimed their Tasers at the man, instructing him to drop the knives. When this was ignored Constable McDowell fired his Taser, which had no effect in subduing the man. The man then stood and charged at the officers with both knives outstretched. Sergeant Lilleby fired his Taser, again with no effect, before the officers became separated as they attempted to back out of the room. Constable McDowell was cornered by the man in the kitchen and was stabbed in the stomach with the larger knife. Fortunately the blade was stopped by his stab resistant body armour vest.

As the man tried to stab Constable McDowell in the neck with the smaller blade, Sergeant Lilleby grabbed him from behind while he still had both knives and wrestled him to the floor. Sergeant Lilleby struck the man in the head to stun him. After a violent struggle the three officers were able to disarm and arrest the offender.