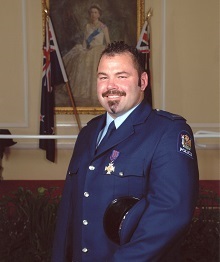 On 7 May 2005 at 7.15am, Constable Bennett was driving past 36 Cooper Street in Dunedin when he noticed the house was on fire. Neighbours advised him that two children were in the house and was shown their bedroom window. The room was thick with smoke and he couldn’t see inside. Constable Bennett broke the glass, reached inside and could feel a child’s body. He and a neighbour then broke the glass of a larger window and Constable Bennett put his upper body through the opening and dragged a boy to the window, where he handed him to the two neighbours waiting outside.

He then went back into the room using a ground sheet to cover his mouth and nose and had to feel his way around inside, as there was no visibility. Hearing a child whimper, he moved toward the noise and located a girl wedged between a bed and the wall. He wrapped the child in the ground sheet, carried her to the window and handed her to a neighbour waiting outside. He was then told the children's mother was also still inside.

He left the house and went to a rear window and looked into another roomful of smoke. On smashing the window, moaning could be heard inside. Constable Bennett reached in and managed to drag a woman to the edge of the room before he was overcome by smoke. Feeling sick and dizzy, and with the woman still inside the room, he returned to his vehicle where he got a mask so he could go inside to rescue her. At this point the Fire Service arrived and Constable Bennett took a fireman to the window. The fireman entered while Constable Bennett reached in from outside and together they were able to lift the woman out through the window.

By his exceptional bravery, Constable Bennett enabled the rescue of three people from the blazing house.